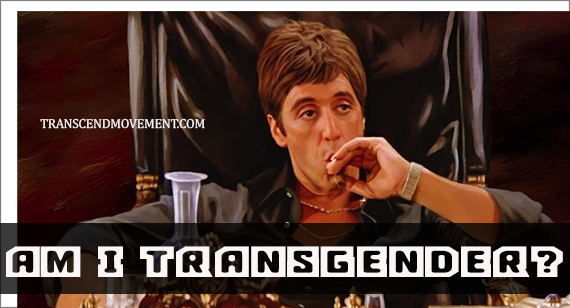 I’ve had a few comments and e-mails recently along the lines of – who the fuck are you to start writing books about gender variance and transgender philosophy when you’ve never said what your own gender is. Are you actually transgender… why aren’t you telling anyone?

And there’s a simple answer to that… nobody asked.

So, Am I transgender?

Well, sorry to be a philosopher, but if you want me to tell you that then you’ll have to clarify what you mean by transgender. Let’s look at Wikipedia: apparently, and it’s a definition most people would share, a transgender person is one who identifies as a gender different to that which they were assigned at birth.

I was assigned the gender male – at birth – I identify myself as male. Therefore, I am not transgender.

However, you may have noticed my careful use of words. I did not say ‘I identify as male’ I said ‘I identify myself as male.’

This is what we call in transgender philosophy the conscript male. It is a gender identification one uses when crossing international borders, filling in forms, obtaining medical treatment and the like. It’s basically like being conscripted into the army… you were born/called up to serve as a male and – by God – you will serve your gender. All be it… grudgingly.

Which of course, leads to the question… okay, your passport says ‘male’… but what gender do you ‘identify as’? And this is where the problem starts. You see, I am on board 100% with contemporary gender theory – that a person should be allowed to identify as the gender they want – but personally, I find the concept problematic.

Identifying as female… I just don’t quite get it.

I know that I certainly identify with females, I know I would prefer to have been born female, I know I have a long list of traits – mental and physical – that another trans person would use to back up their whole ‘identifying’ thing… but for me, I need to have clear what ‘identifying as female’ means exactly.

The first thing I want to establish is that I would never identify as female because I believe I have a mind or personality that is more feminine than masculine. The primary reason for this is that I am – forgive the expression, a man of the world: not only have I lived in both Anglo Saxon and Latin cultures but I have known many women in many different contexts – romantic, sexual, professional, familial – and my experience has led me to believe there is no such thing as a female personality. I have known some very cruel women and some very tender men and some very violent men and some very honorable women. In other words, I do not believe in gender stereotypes… even for a second, and to be perfectly honest, I find the whole notion of seeing your personality as more female than male as a massive violation of gender politics.

Now, we don’t have time to go into this now, but.. I am aware that there are certain behavioral qualities that may currently be statistically more prevalent in one gender than the other… but firstly, that varies from culture to culture, and secondly, if we had a half way decent education system then boys would leave school being good communicators and girls would be good at being rational or whatever other nonsense people think is different between men and women. Sorry, but I’m a fundamentalist on gender equality and as soon as you start putting differences between the genders (even if they might exist to a small degree) then you open the door to treating them differently. You do not need to become a woman or identify as female to be compassionate/open/communicative etc… if you wanna be compassionate go and do some voluntary work in Africa.

So, as you can see… not much identifying as female there. What else is there that’s considered female that I could identify with, and therefore… identify as?

So, it’s not going well on the transgender front. What we could do, though, is look around for other related terms. Let’s look at the definition of transsexual. According to ICD-10, a transsexual is a person who exhibits…

a desire to live and be accepted as a member of the opposite sex, usually accompanied by a sense of discomfort with, or inappropriateness of, one’s anatomic sex, and a wish to have surgery and hormonal treatment to make one’s body as congruent as possible with one’s preferred sex.

Now that shit… that is right on the money. That is an almost perfect statement of what I have to live with. That describes me exactly, and the reason it does is because it talks about a mental state which I can relate to much better…

I can relate to the ‘desire’ to live as a female because that captures perfectly my experience. It is something that goes beyond language and identification: a desire – the origin of which I do not know – that is all consuming. Identifying as female ie – being transgender – seems to involve doing a course and then passing some exam, or at least passing through a whole lot of self questioning to see if I identify as female.

Maybe ‘identifying’ as female is not some big, long, tick the box questionairre type process. Maybe it’s just another way of talking about that desire and need which goes beyond language. Maybe, rather than the symptomatic description that is transsexualism, ‘transgender’ gets straight to the end consequence of those symptoms; you identify as another gender whether you like it or not and whether you pass the ‘female’ exam or not.

This idea I like… that identifying as female is essentially metalinguistic and beyond your control – and that is the very essence of the transgender condition. It is good because it stops people having to justify to themselves or anybody else why they identify as female; they identify because they are transgender. Full stop. Transgender male2females always look for ‘gender scraps’ – fragments of femininity in their current self and previous life that justify their identification. It’s a case for feminine essence and, to be honest, is usually pretty weak and involves gender stereotyping. If identification is metalinguistic, however ie – not a process of reasoning but the result of a biological* condition – you don’t need to argue that you are a female. If you are transgender then you have the right to reassign yourself as female – period.

Another consequence of this view of ‘identifiction’ (more biologically based) is that we could finally ditch the word transsexual. This is long overdue. The two justifications for the existence of the word ‘transsexual’ are both bogus.

Oh dear, I seem to have gone off topic… this could well be Felix Conrad avoiding the question posed in this article…

* Term 1: that this is based on ‘identifying as a female’ being caused by my being born with a mismatched gender core and not some rational process where I deduce I’m female. In other words, it is beyond my control.
* This is based on nobody ever referring to me as a woman, a transwoman or anything similar. I militantly defend the right of transgender people to assign their own gender but personally I see the labels ‘man’ and ‘woman’ and ‘non binary’ in fact, even the word ‘gender’ as entirely redundant. If pressed by a doctor or bank manager I will identity myself as a man and, to be honest…I have no real problems saying so. I like men. Men are beautiful.

This last term and condition might well have people jumping to say that I am not transgender… that, I identify as a man. Whatever! In certain circumstances society demands I make a linguistic utterance about this unnecessary invention inherited called ‘gender’ and for reasons of personal convenience it is better for me to respond with the words ‘I’m a man’ rather than launch on a long-winded discourse about gender variance in the twenty first century.

Finally, this long-winded discourse about gender variance in the twenty-first century has been delivered for the benefit of my transgender readers – who are interested in such issues. But I do not want anyone to interpret these complications as an attempt to water down or escape the fact of what I am. So let me state categorically, that I am transgender and I am proud to be so.