TRIGGER ALERT: Don’t read this article if you hate the paraphilia discourse. The mission of this site is to explore all aspects of gender variance. But you don’t have to! You can pick and choose! So don’t read this if you suffer with the fetish argument. xx

I opened my page and this suggested video was staring out at me. I suppose the suggestion was based on my research into ‘paraphilias.’

You will notice that there’s no mention of sexual gratification in this video. Nobody mentions the A word (Apotemnophilia). This puzzled me, so I entered BIID in Google and was sent to this research paper. I recommend you take 10 minutes to look through it.

Then I found myself on a page describing xenomelia…

It seems there exists the same tension in the BIID community as there does in our community. There are a bunch of people who describe the behaviour as a paraphilia that’s sexual in origin, and other people who see it as a phenomena concerned with identity. To the latter, the A word (apotemnophilia) is as dirty as our own A word (Autogynephilia).

Unfortunately, I don’t have time to consider the relevance of apotemnophilia right now, but I will finish this rapid post by explaining the uncomfortable aspect of all this…

From the first moment I read it, I recognized this passage of Anne Lawrence’s work as a grave challenge to the ‘feminine essence’ argument (Page 24 Men Trapped In Mens’ Bodies) 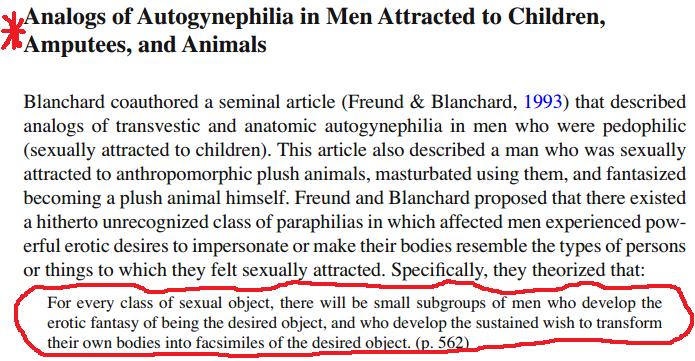 As I said…it makes for uncomfortable reading!