While writing an essay this morning I found myself using the term ‘mildly transgender.’ Immediately, alarm bells started ringing. I could imagine a knock on the door at 3AM as the LGBT thought police came to take me away.

This is because they want to carve out a complete and tangible identity in society: transgender; and if we start allowing people to be ‘mildly’ transgender it really screws with that identity. Imagine! you go to a party, tell people you’re transgender and they’d be like… ‘Oh really? Mild or full blown?” For many, the fact they’re transgender is the main building block of their identity and they dont want some Vanilla Ice version knocking about (NOTE TO SELF…. 90s cultural reference… don’t reveal you’re an old cunt, Felix.). As members of the LGBT community they’d say… ‘Gays don’t go about saying they’re mildly gay and you can’t go round saying you’re mildly transgender.’

In my opinion, though, while I see that ‘mildly transgender’ is a clumsy term… we have a desperate need for something in that general area. I will explain why.

Every year an unkown quantity of people ask themselves an important question in their lives:

Am I transgender or not?

It is the most badass, megalithic motherfucking binary question of all time. There’s no like ‘maybe’…’partially’…’lightly’… there’s just two motherfucking boxes to tick. ..

The interrogator’s lamp is on your face as you sweat under the force of the two polar opposites. This is George Bush’s axis of evil right there… you’re either with us or against us. There’s no Switzerland here. 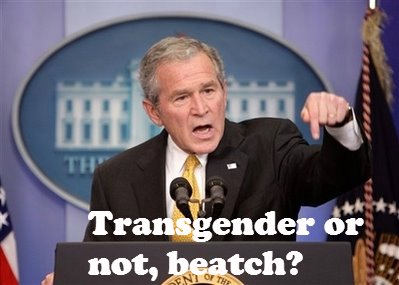 But is that correct? I propose we modify the question.

First of all, let’s remove the ‘not.’ You’re asking yourself if you’re transgender so there’s obviously something going on. Normal dude – Barry the builder – doesn’t just wake up one morning, look in the mirror and say… ‘am I transgender?’. The ‘not’ option is silly… like you choose it and by 5 pm you’re in a bar with the guys, knocking back a coldie, scratching your balls and expressing your views on the Redskins new quarterback: gender crisis over.

So, because you’ve obviously got some gender issues it would be much better to have the binary…”Am I transgender… or mildly transgender?”

Again, I know some people will go nuts at this expresion but I really think we need it. There’s a huge amount of peope who never reach a satisfactory answer because the two choices are so far apart. They chose the ‘or’. The result is a tonne of people in some kind of limbo not knowing what the fuck they are.

We humans need labels… it’s the only way we understand and cope with things. Have you ever read Heart of Darkness or seen Apocalypse Now? Why do you think it’s so chilling when Kurtz says ‘The horror, the horror’? It’s cos he didn’t put a label on it. It’s just… ‘the horror.’

Returning to the gay analogy (people don’t say they’re mildly gay so you can’t say you’re mildly transgender) you can start to see why LGBT is an uncomfortble alliance; though sharing so much in common – we are different. There’s no test for being transgender, or even an agreed upon definition, and that’s why you could say something like ‘I’m mildly transgender.’ With a gay it’s simple…

Oh shit, thinking about it, I am mildly gay. Maybe you can say it. Okay, let’s just move on from that one.

The point is that if there existed some kind of peer approved, vaguely medical diagnosis – mildly transgender – I think alot of people would feel comfortable with that notion. Like I said, humans need labels that make sense – especially in our community where absoloutely everything is disputed.

What do you think? Is ‘mildly transgender’ a meaningful label?