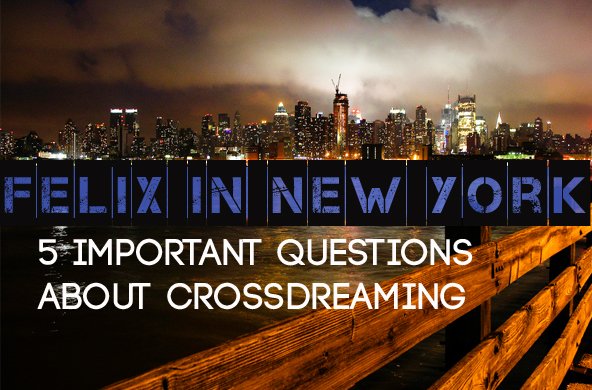 As I walked the streets of New York on Friday, I was doing what most biological men do as they walk around the city: admiring the architecture and admiring the women. However, my feelings with respect to these women were different to other men.

Being crossdreamy not only leads to sexological differences…but to a whole series of questions about those differences. So, as I walk around Manhattan I’m having 3 lines of thought.

1: Wow…she has such a beautiful face.

Being a crossdreamer is exhausting!

Finally, I decided to stop at Starbucks on Fifth Avenue and write down  all the crossdreamy questions I’d had on my walk. My logic was a dictum of problem solving: that you can’t find the answer until you formulate the right question.

Despite the rumours…I’m not stupid. I know I’ll never stop getting turned on by crossdreaming. However, what I don’t understand is that if crossdreaming is a sexual orientation…then the euphoric aspect of being in love with oneself as a woman – should wear off just like other forms of euphoric love (at least for a while).

Basically, I buy into Anne Lawrence’s idea that my late-onset transsexualism is a falling in love with myself as a woman – the crossdreamer equivalent of a hetero falling in love with an external woman. However, if this is the case, the whole obsessive/dreamy/giddy love aspect should wear off. It’s human nature that any strong feeling – the giddiness of initial love, for example – wears off, and is replaced with a more down to earth feeling.

However, that’s not what’s happening. It only gets stronger.

2. What can you do to reduce the constant obsessing and yearning?

In my opinion, there’s a far more interesting question to decide if you’re transgender than if you could go back in time and press a magic button to be female would you press it?

Imagine they invent a cure for gender dysphoria. Once you take a single tablet you’re happy with your biological gender and never have dysphoria again or the yearning to be a woman. Would you take the tablet?

My answer is ‘no’ …  (another day, I’ll explain the question.) The point I want to make is that although I don’t want to eliminate the feelings I have, I wish I could find the perfect lifestyle/ method to reduce them. My ultimate goal would be to experience the positive aspects of a crossgender nature…but not feel the loss and the pain. How can I do that?

(Just in case you haven’t read my blog before, I’m totally unconvinced that ‘transition’ would reduce my obsessive crossdreaming.)

3. Why do both the sexual and emotional aspects of crossdreaming take so long (in some cases – decades!) to emerge?

One of the weakest parts of the transgender narrative is that a middle aged man who experiences a transgender awakening was repressing his desire to be female his whole life.

While this is true in some cases (classic trans kids forced to live as their biological gender) I can’t relate to this narrative. Not only did I never want to cross genders when I was young, but even my sexual behaviour was only partly cross gender. I was indulging in disjointed fantasies that contained feminine elements (i.e. transvestic, behavioural etc.) but wasn’t imagining being a complete woman.

And although I was never sexist, even in my early thirties you could find me in a bar talking about women the way most guys do:

Women to me were ‘other’ – something different – and not a group I identified with.

So the fact it took 30 plus years to develop both a sexual and emotional desire to be 100% woman challenges both the sexological and transgender narratives of crossdreaming. If you were a transwoman due to a female neurological component then you would surely know it…just as transkids know it… from an early age. Similarly, if it was purely sexual, why would it take so many years to develop? If you’re heterosexual then you know you like girls from a very early age; femephiliacs should not take decades to arrive at their sexual fantasies of being 100% woman?

4. Is the transgender condition a mental illness?

The two communities who rush to answer this question – religious conservatives and transgender theorists – need to slow down and treat it with the respect it deserves. It’s a serious question and it doesn’t help anybody that pro and anti trans commentators politicize it.

The question resonates with me because I’m transgender with no plans to transition. I lack, therefore, the endgame and justification that a transitioner has for their feelings. If you transition then the transgender condition is interpreted as a call to fulfill your true nature; therefore, when you fulfill that nature, the condition has a coherence that makes it mentally healthy.

Take away the transition, however, and being transgender/dyspohoric is nothing more than a giant pain in the ass… and starts looking like a mental illness.

Look at my statement above, for example: even though this condition is pretty much guaranteed to make me suffer the rest of my life, I still wouldn’t choose to remove it. That shows just how possessive and dedicated we are to our transgender feelings. This sounds like a classic obsession. And, bearing in mind this obsession often breaks up families and causes people to start massive hormonal and surgical changes, you have to ask yourself: is this a mental illness?

I’m fully aware of the counterarguments. In fact, I’ve written endless essays about them…but I still ask myself if this is some kind of psychological disease.

5. What would happen to my crossdreaming if I really could become a beautiful woman?

This is more of a thought experiment, but it’s important because so much of the way we feel as crossdreamers is connected either with what we can’t have or what we’re trying to get. Therefore, the non-transitioner is constantly caught between fantasies of what he wants and the pain of never getting it, while the transitioner is caught in an endless quest to become ever more feminine. Either way, it’s about constant longing.

But what would happen if one could achieve – through surgery – an  embodiment of one’s fantasies. So, as I’m a sad Alessanda Ambrosio obsessive, what would happen to my crossdreaming if I could be as beautiful and feminine as my idol (not look exactly like her…that would just be weird!)? Would it…

Been able to execute this experiment would tell us a lot about the underlying motivations of crossdreaming.

Well, I know I’ve spent the last couple of years thinking about these questions, but I just wanted you to know that they still occupy me. Remember, until we know a lot more about the brain…he best we can do are educated guesses.

Drop me a comment and tell me which questions are on your mind…or any answers you have to mine. I leave you with Alicia Keys!