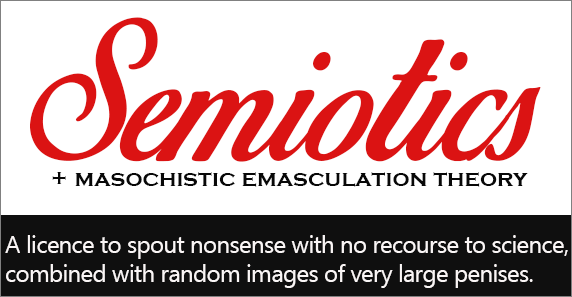 The oldest trick in the book for invalidating transwomen is to get them to see that their desire for transition is the result of a fetish. Increasingly, though, with the complete annihilation of theories like autogynephilia and the widespread acceptance of transmen and women in society, such theories are becoming less and less viable. Like all things that face extinction, though, they try to adapt and survive… and as they struggle they become all the more vicious…

The use of emasculation to emasculate the transgender narrative is fascinating. What it does is… not only tell you that your desire to transition is the result of a fetish – but that, just in case you don’t care whether it’s a fetish or not – that you are mistaken about the fetish: you don’t have a fetish for being a woman….

…but a humiliated sissy of a man.

Therefore, not only do the obvious signs of emasculation betray your true desire (forced femenisation etc) but in fact any attraction to anything feminine. Yes, your desire to dress as a woman, your love of men, your desire for more feminine features… this has nothing to do with being transgender or a fetish for being a woman, but to do with your attraction to anything that symbolizes  the failed man you are. And if you’re transgender and also have this fetish… the transgenderism is caused by a kind of infection… the fetish has leaked into your entire personality.

I will explain in a minute the fallacies that lie at the heart of this idea. First, though, I would like you to be shocked at the hateful nature of denying a transwoman even the offensive notion that she has a paraphiliia for being a woman… and saying she has a fetish for being a humiliated man. This, of all the indignities heaped upon transwomen has to be the most shocking of all time. But that is not all… their followers are so dedicated to reaching transwomen that they have started up dozens of fake reddit accounts to circumvent bans from moderators.

Ok, now we’ve all been suitably shocked… allow me to deconstruct this nonsense and those who pedddle it.

Emasculation theory has the 5 trademarks of all good transphobic theories…

However, I’m much more interested in the second trademark of a transphobic theory – the irrefutable fallacy – because this is the one where most people waste away their valuable time arguing with the clowns who promote such theories. Allow me to explain…

Whenever you explain a fantasy to an emasculation theorist they will say that you are not attracted to the thing or scenario in itself, but only its symbolism as an instrument of your humiliation/emasculation. So, let’s look at some common fantasies.

Emasculation interpretation: no you don’t. You only love the cock as a SYMBOL of you being a humiliated sissy that is only good for sucking cock.

Emasculation interpretation: no you don’t. Lingerie is the ultimate SYMBOL of femininity and your having been emasculated into a lingerie wearing sissy.

Fantasy: I want to kiss a boy.

Emasculation interpretation: no you don’t. Girls kiss boys… you only wanna do it because being a girl SYMBOLISES you’ve been humiliated at being a man.

Fantasy: having breasts would really turn me on.

Emasculation interpretation: yes, but only because they would SYMBOLISE you were definitely not a real man.

Now, the more observant of you will have already noticed why this idea is so ridiculous. There is no fantasy a transwoman can have – barr… fucking a midget dressed as a sheep – that can not be interpreted as symbolizing emasculation. A transwoman – by the very fact of being a transwoman – imagines a female body in fantasies, therefore all fantasies (even… fucking the midget dressed as a sheep) are intrinsically emasculated in the sense they involve a departure from masculinity. This is like taking an amputee and saying that he has an amputee fetish because every time he has sex he has an amputated leg. The fact is, of course, he must have sex as an amputee due to his condition. So…

You will be entirely wasting your time trying find any sexual fantasy that is not emasculated. As long as you somehow see yourself as a woman, or like something feminine, or a man is involved… you are emasculated.

Therefore… when he points out your fantasies are emasculated… you must point out… “I would not describe them as such, but as I’m a transwoman all my fantasies will be, in theory, emasculated.”

This will put him off guard, but then his face will light up…

“Ahhh… so you admit it… Therefore, if the common feature of all your fantasies is emasculation then that is what is driving the fantasies and that is the basis of your sexuality… emasculation.”

And here we come to the heart of the issue: once again we have the same logic and modus operandi as autogynephilia, which is

BECAUSE THAT’S HOW THEY fucking SEE THEMSELVES!

Observing behavior and interpreting it, is of course what all science is based on. A scientist observes a phenomena, speculates as to its meaning and then conducts an experiment to confirm his interpretation. These charlatan emasculation theorists actively spurn science and choose semiotics.

For those of you that don’t know… semiotics is the interpretation of signs and symbols. What should stand out in that definition is its similarity to the definition of a seer or divinator… an interpreter of signs – and there really is little difference! While researching this article I scoured dozens of forums where this transphobic virus has appeared and saw constant reference to all those wonderful tools of gobbledygook and psychoanalytic drivel…

This, of course, is one of their main strategies for belittling and wrong-footing the transwoman: bomb her with so much jargon and long words that she doesn’t quite understand what’s being said. This has two effects.. to make the theorist assert his superior intelligence and to make the transwoman feel stupid. After being called out at his inflated language, one such theorist replies…

“You are presupposing that everything is commonsensical, or at least can be transposed into commonsense. It can be the case that what is necessary to understand is the abstract underpinnings of familiar thought.”

Dumb bitch… you’re not clever enough to understand me.

What’s striking, however, in these people’s discourse is their simpleminded emptiness. Having looked at two years of material you see the same five or six sentences repeated ad nauseum… the dogma of low intelligence, and people incapable of either re-articulating ideas or developing them.

Another tactic is to comment bomb a website or forum with hardcore pornography links based on overt emasculation themes. Such pornography can arrive at even the tamest inquiry. Yesterday, for example, Felix asked a theorist to clarify if even vanilla cross gender fantasies are masochist emasculation fantasies. This is what he received… (without the penises being covered up)

The principal goal of this strategy is to immerse you in emasculation and to remind you of any submissive fantasies you have. Therefore, because Felix had asked about vanilla fantasies he was essentially told… there are no vanilla fantasies (and even if there were the fact you are a woman in them is the emasculation part). More than that, it is to keep you disorientated and to interrupt your argument. This is the only strategy they have because there is not one shred of scientific evidence for their theory.

Another important dimension is that they are all submissive fantasies. All orientations and sexual kinks have submissive variants and the particular ‘semiotics’ – ie. signs and symbols of that submissive kink – will be tailored and relevant to that particular person. Therefore, a submissive crossdreamer will obviously be humiliated in the discourse and symbology of  cross gender themes ie – a lack of masculinity and a surplus of femininity.

The point is that there are many possible interpretations of the behaviour – none of which can be scientifically verified – only argued for on the basis of semiotics and psychobable and ‘an analysis of the fantasies’ (which will of course be analysed from the bias of whoever is analysing them.)

When an emasculation theorist offers to analyse your fantasies it’s a bit like that free personality test Scientologists offer to lure you into their discourse. I think we’d all agree that we had quite enough fantasy analysis from Mister Blanchard. Semiotic analysis of sexual fantasies has the same clinical value for transgender people as analyzing dreams: ZERO! Unless of course, you’re attempting a reparative therapy.

Rule 2 for dealing with emasculation theorists:

We all like a good debate… but the problem is that these theorists do not recognize the limitations of semiotics, and treat them as hard fact. Furthermore, they are committed to taking this debate out of their own private spaces –  fetish websites – and actively shoving it in the face of transwomen. They want to make damn sure we know that our decision to risk everything on transition is the result of a fetish….

….for being a failed man.

What I find particularly immoral is that the main proponent of this theory states categorically that he has never wanted to be a woman or experienced dysphoria… simply that he has a sissy fetish. For some, reason… this person thinks that having a sissy fetish gives them a right to analyse and preach to transwomen: DISGUSTING ATTITUDE.

The justification for this harassment is some imagined ‘crossdreamer’ conspiracy to make sissy fetishists transition into transgender women. In reality, though, it is – like all male conflicts – a dick measuring contest between two males. The fetishist leader is jealous of the prestige Molay has in the transgender and crossdreamer community, and the fact that he can not dominate the conversation over cross gender arousal. Every person named in this alleged conspiracy – most of all Felix Conrad (who wrote a whole book on NOT transitioning) – have a strong track record of avoiding dogma with respect to trasngenderism and advising caution with respect to transition.