This article is in response to Contrapoint’s rebuttal of Blanchard’s theory. I will argue that transwomen should consider such theories beneath them…and not worthy of serious consideration. 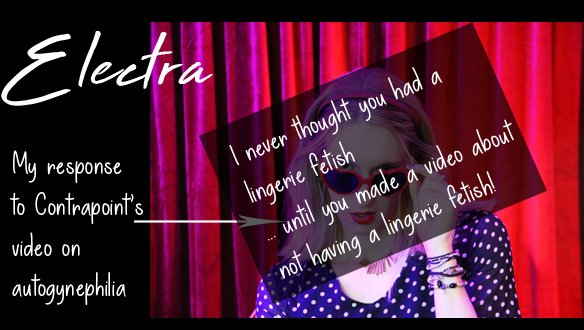 …that if it wasn’t for transwomen talking about it all the time, the aforementioned theory would have disappeared into obscurity a couple of decades ago.

Despite the constant fear that said theory might be used to whip up a groundswell of transphobia, 40 years have passed and regular citizens still don’t know Jack diddly about Blanchard or his theory. Not only that…but even if you explain it to them they simply don’t get it. And why don’t they get it? Because the logic of feminine essence and being trapped in the wrong body not only has deep cultural roots, but it’s far more logical.

This means that the only people keeping the theory alive are transwomen who, year after year, write vlogs and tweets and tumblrs and books about it. And here’s the worse part about their discourse : not only does this constant coverage give oxygen to the dying embers – it is plain embarrassing to watch well-intentioned, intelligent transwomen fall into the trap of taking this Mickey mouse theory and analysing it point by point as if it was a scientific theory that needed to be refuted.

If I told you that your femininity was invalid because on the day you were born, Orion was in line with the planet Venus, would you bother writing a lengthy refutation? No! You wouldn’t bother because the charge isn’t plausible enough to warrant a rebuttal. The fact that so many transwomen feel the need to respond to Blanchard gives the impression that Blanchard must have a point because if they didn’t think he had a point they simply wouldn’t bother. And that’s where the humiliation comes in: by giving him so much space and coverage they are essentially volunteering to put themselves in the dock to answer charges of invalid feminine appropriation. Girl…you don’t need to answer no charges from no-one!

But the real humiliation comes when, having put themselves in the dock, they then fail to refute Blanchard because, as I’ve tried to explain on numerous occasions: the theory is couched in such a way that it can not be definitively proven or disproven. Most of it comes down to a linguistic trick.

For example, because all transwomen are indeed either gay or straight you can’t deny that there are two types of transwomen – gay and straight. The point is, however, that while it’s true that you can divide transwomen into straight and gay, there’s fuck-all to gain from doing so. Rather than pointing that out, however, most transgirls put all their energy into trying to disprove the central idea that there are two types of transwomen: SOMETHING THAT CAN NOT BE DISPROVEN, thus making anyone trying to disprove it look completely stupid.

The second farcical argument is trying to disprove that transwomen transition for sexual reasons. Why? Because it is impossible for a transwoman to never have fantasized about having a female body…

…Ergo – it is impossible to definitively prove that her motive was not sexual.

Psychological causation is not like mechanics. When it rains we understand exactly the causal mechanism between water vapour and clouds and rain. The human mind, by contrast, is an infinite litany of causation. You can argue that unconscious childhood trauma caused a behaviour, or lead in the water supply, or suppressed oedipal rage or another billion things. This means you can’t satisfactorily prove or disprove a sexual motive for transition, meaning -once more – you look ridiculous claiming the contrary, and like you’ve got something to hide for denying it with such vigor. Therefore…you need to point out that it can neither be proven or disproven…and that’s what makes the theory a waste of time.

The final self-inflicted wound with respect to this topic is when transwomen start denying the existence of a feminization kink. It may well be, as in the case of the video above, that a particular transwoman doesn’t have said kink, but trying to deny the sexual behaviour Blanchard described is just plain dumb. All you need to do is to place the words ‘feminization fetish’ into Google and then press ‘images’.

A quick jaunt to Tumblr soon unlocks a universe of feminization that is enjoyed by biological males who have no desire to transition or live as another gender. When transwomen make videos denying this universe exists, then it comes off as plain ignorant because we all know that it does exist and it’s obvious that it is populated by guys getting off at the idea of themselves as women. You then have to start saying that either…

Rather than deny the existence of this sexual desire, you need to deny the interpretation of that desire.  As I argue in my book , Transgender – Fact or Fetish? – this desire might actually proceed from some intrinsic feminine essence…or it might be a kink that comes from feminine essence that is then subject to imprinting…or it might be a quirk of neurology…or 101 things different from what Blanchard indicates. Transgender women have to stop thinking that acknowledging the existence of a distinct feminization kink is a prima-facie condemnation of their identity. Like so many things in the sphere of sexuality and gender we just don’t know the underlying causation and it could be just as much the result of real feminine essence as the result of a male essence gone wrong. We don’t know…and that’s why Blanchard – or anyone else – has no damn right to claim that they do know.

So to conclude, refuting Blanchard is an absolute waste of time because his main assertions are either obviously correct, obviously unprovable or obviously a linguistic trick. What unites all these three characteristics, however, is that you just look silly trying to argue with any of them. A theory which is composed of stuff we already knew, stuff we can never know, and stuff that can only be known through linguistic shenanigans…is not worthy of serious inquiry. When you approach it seriously you make it serious…and as we all know you’ve got no chance of refuting the irrefutable so it can only end badly.

The best example of this is the utterly lame argument that transwomen don’t have a fruity relationship with female underwear (apparently, just as women find it sexy…transwomen find it sexy.) Yes, it’s true…there’s lots of transwomen who get a classic female buzz off of female undies, but we also know from numerous case-studies that there are many transwomen and biological men whose relationship with such garments is of many magnitudes of intensity higher than a classic female buzz. I know this..we all know this…and when someone goes to the trouble of making a video to deny it…the only thing it does is make me suspect that the video maker does not belong to the first category of transwoman but the second. You need to show that the interpretation is unprovable…not dispute the underlying facts.

Therefore, please stop empowering this theory by treating it seriously…and please stop putting ideas in people’s heads by denying things which you don’t need to deny. Voluntarily going public to defend Blanchard’s charges is like volunteering to be interviewed by the FBI: you never committed a crime, but now you’re in the interview room you run the risk of a misleading or false statement that makes you look guilty. Transwomen don’t gotta answer shit…and especially not on account of some two-bit theory that relies on a whole bunch of shit that can’t be empirically verified.