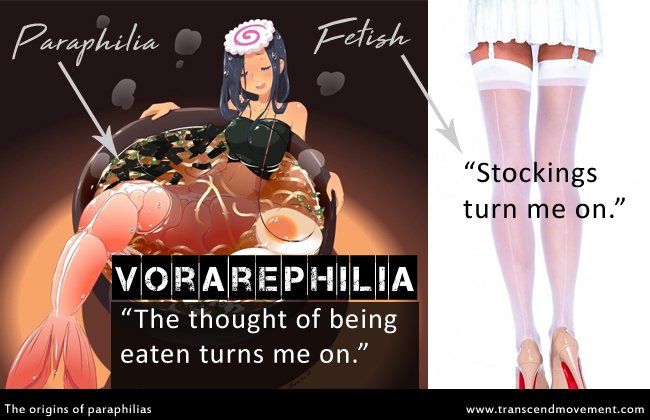 Today I’d like to propose a theory about the origins and causes of paraphilias. I call it ‘quick and dirty’ because it deals with concepts which will be impossible to verify until we have a complete understanding of the human brain i.e. NEVER. Therefore, this theory is speculative – the sexological equivalent of bar room philosophy.

(Quick note: fetishes are not paraphilias. A fetish is a sexual interest that develops later in sexual development by classic conditioning, imprinting or association. My definition of paraphilia is a sexual orientation that is not hetero, homo or bi. More of that later!)

My theory on the causes of paraphilias

To understand my theory you need to begin with a question: What can we learn from the established list of paraphilias? Are there any common features which call your attention?

Look at some examples…

The thing that calls my attention is the biological and visceral nature of these sexual preferences. Although you can find some exceptions, they all center on the primordial stuff of living organisms: shit, milk, fear, blood, insects, infants, pain etc.  Any paraphilias that aren’t overtly visceral are covertly related to an underlying biological entity (for example – stuffed toys are related to animals that have fur.)

Therefore, although it seems logical that paraphilias should also involve unique features of the modern world (cars, computers, skyscrapers) the reality is that they centre on universal biological entities or states of mind. This means that paraphilias are based on the components of life experienced by all higher animals: for example…feet, urination, death, injury etc.

A paraphilia that demonstrates this is vorarephilia – a sexual preference for  being eaten or watching someone else being eaten and swallowed whole. This intensely visceral and brutal desire centres on the most basic of biological behaviours – eating – combined with its attendant object: food.

We should also consider Acrotomophilia (amputations.) This seems like a way out there fetish, impossible to have any anchor in universal mammal experience, but think about how intrinsic our sense of bodily integrity is, our consciousness of injury, and the way we are repulsed by deformation. In other words, amputation register with our deepest instincts.

The foundation of my theory

My theory depends on the idea that human beings are not born with a clean slate. Human beings are hardwired with labels for key aspects of existence: e.g. urine, blood, food, mother,  father, shelter, and certain states of mind:  danger, suffering, desire etc. We are born with a picture dictionary of both the objects we will encounter and certain commands we need to deal with them. 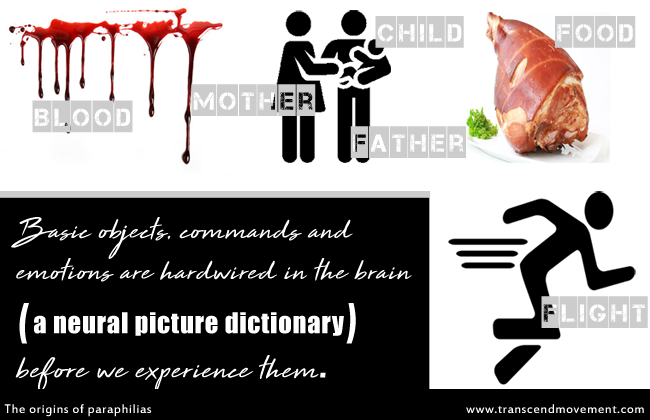 Essentially, the human brain comes with an operating system of what’ll be encountered in life, and in some cases – how to deal with it. If you doubt this, ask yourself questions like: how does a baby know to suck on a nipple? When you think about it, there is no reason why a baby should start sucking on a teat. It can not do it by accident..so must be following some form of programming which involves the command – sucking … and the object – breast.

Similarly: why animals don’t commit suicide? Every time I see my cat walking on a narrow ledge I take it for granted that he won’t decide to randomly walk off it. It’s so fundamental that it seems stupid to even ask why he doesn’t walk off the ledge… but the question is of deep importance.

ANSWER: the cat won’t walk off the edge because it doesn’t want to die. But how, if he’s never died and has no language to cognitivise death, does he know what death is? He’s never witnessed death by falling…yet he knows instinctively that he doesn’t want it and if you tried to push him off he would fight for his life to stay on.

The only answer to this question is that the cat has a hardwired concept of death… and the programming command… avoid at all costs.

The relevance of hardwired commands and labels (for sexuality.)

Think about a heterosexual male.

If we look at neurological development as an unfolding program (the frontal neo cortex isn’t completed until the mid twenties) then we know that at some point in the program human sexuality develops. This involves the marriage of the command ‘be attracted to fucking’ with one of the components in the hardwired picture dictionary: woman (or, in the case of homosexuality the command is married to the picture: man.) This marriage is then reinforced by dopamine and he will forever feel a shot of dopamine to his brain (i.e. pleasure) and a tingling in his balls when he thinks sexually about women.

Obviously, what has happened in the case of a paraphilia is that the brain has married the command ‘be attracted to fucking’ (i.e. get an erection) with one of the other components in the hardwired picture dictionary: child, for example, or urine.

How could this happen? Error…or social engineering?

Probably, we’ll never know, but it could be that the original system was designed for a specific ecological context -life on the Savannah – and there’s something about modern life (delivery rooms, houses, men looking after babies, pollution, millions of other factors) – that cause the delicate interaction between picture dictionary, command and the external world to become confused.

However, this idea depends on a presupposition that has contaminated sexology since its inception: that anything not heterosexual is ‘abnormal’; in other words, just as deformity of a limb is a mutation that nature did not intend, paraphiliac and homosexuality are a mistake.

As I have written, elsewhere, though, nature may have intentionally chosen to create variant sexuality for social engineering purposes…

For example: imagine if all males on earth were straight, red blooded, testosterone driven beasts. Not only would this lead to more violence because of all that testosterone, but there would be more men competing for females. The introduction of men into the group who are not ruled by testosterone, or who are in love with a fetish object or are in love with other men – allows the presence of neutral males in groups. It also allows men who empathize more with women and all sorts of benefits which could lead to the survival of a group/clan – and therefore, the genes of that clan.

My ‘theory’ would definitively categorize paraphilias as sexual orientations

While most theories presume that paraphilias are the result of some external experience (the baby encounters blood /stuffed toys) that hijacks the normal process of orientation, my theory proposes that the paraphilia was made internally, independent of any external event in the outside world. There is a widespread belief that paraphilias must have come through an overbearing mother or a Nanny stepping on your balls with her feet or shit being smeared in your face or God knows what else…I am highlighting a possibility that paraphilic sexuality could come from within.

That’s why it is correct to call paraphilias ‘sexual orientations’ because they follow all the same forms of neurological, emotional and developmental trajectories as heterosexuality. It’s just that the target of attraction is not ‘man’ or ‘woman’ but another entries in the picture dictionary.

Sexologists tend to see the development of paraphilias as an external ‘vandalism’ of the heterosexual love map and thus qualitatively different from classic hetero and homosexual orientations, but I believe that they are qualitatively the same…and thus, although we may want to categorise them as different because they are criminal or anti-social (paedophilia) they are in fact sexual orientations.

This idea is strengthened by the fact that paraphiliacs clearly fall in love with the object of their paraphilias. That is why a person is actually willing to amputate their own limb if they are apotemnophiliac…it is not just sexual but an act of love. This is in contrast to the object of a fetish which, though, highly desired, does not make the paraphiliac giddy and gushy. It is clear to me that paraphiliacs fall in love and seek to, in a sense, marry the object of their desire. Anne Lawrence’s captures this idea perfectly in “Becoming what we love” when she argues that ‘autogynephiliac’ men are engaged in their personal equivalent of heterosexual pair bonding when they transition. They are, in effect, marrying themselves as a woman.

As this site is primarily concerned with crossdreaming and gender variance let’s take a quick look at so called ‘autogyenphilia’ (the love of onself as a woman.)

At first this seems unlikely because the command ‘be’ is so abstract. However, there could be a basic command called ‘imitate.’ This command allows an organism to learn by copying the behaviour of another. Perhaps the ‘be’ a woman is somehow linked to this command for imitation. ( I told you this post would be pure speculation! )

So, if you are a crossdreamer, the cause of your sexual affinity for being female might be a simple command error. However, we’ve already decided that sexual variance can not be called an ‘error’ as we don’t yet know if  ‘paraphilias’ are a feature or a bug of sexual orientation. My own instinct is that they are a feature. But…