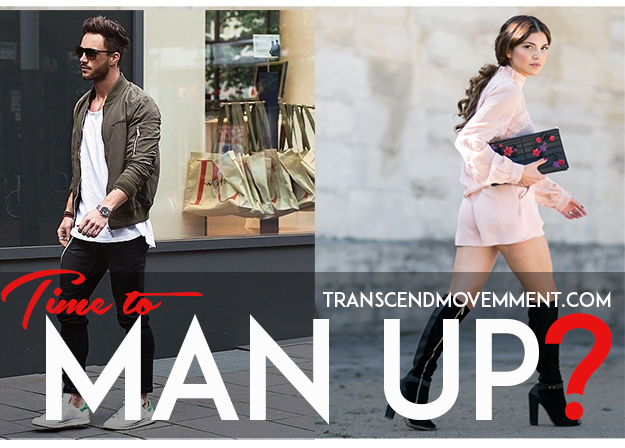 A brief conversation on masculinity:

I am a man who intensely desires to be a woman. However, I believe that transition is a false paradise and that I will be far happier living the rest of my life as a man. But what type of man? If I intend to be male the rest of my life, how should I feel about my masculinity? Should I see myself as a covert woman or should I forget all that fem-stuff and just…

These are questions which all non-transitioners have to face…but they are seldom talked about. Normally, a person with a male to female psychology is so obsessed with what type of woman they are, they barely give a thought to masculinity. Today I’d like to share how I feel about manhood.

1. How do you identify – given you live as a man but suffer from MtF gender dysphoria?

I’d probably describe myself as a ‘transgender man.’

2. Ok…that’s your linguistic description…but how do you feel? Do you see yourself as a woman on the inside?

No. We all know just how compelling and irresistible is the need to identify as female…but I find that if I throw myself a bone and think of myself in any sense as a woman then I end up getting more depressed at being a man. Therefore I resist the notion that I’m a woman in any way, shape or form. I am a man…who by virtue of his transgender condition wants to be a woman.

3. But we all need these identities to keep us going? Isn’t it almost puritanical and potentially cataclysmic (on a psychological level) to adhere so strictly to your gender – given your condition?

I think that many transgender people need to delude themselves as a matter of survival. I’m no different. However, instead of latching onto things about myself that I see as proof of womanhood, my delusion is that there’s no such thing as gender.

In other words, I cope with not being a woman by seeing the whole man/woman difference as inflated. The only real differences are anatomical and thus, superficial. Men and women are just the same lego humans with different bits stuck on them.

Of course, this isn’t necessarily a delusion…you could certainly argue the case…but the point is that because this idea helps me cope with my gender dysphoria it’s not one I want to start debating and investigating. It’s psychologically useful so why start fucking with it?

4. So, if you don’t see much difference between men and women then that must play into how you feel about being a man?

Because I don’t see being a man as that big a deal or that distinctive…it frees me up to gain a certain (very small) pleasure in being a man. I like the fact that I’m not like other men…I have this strange empathy and loyalty and bond with women. I feel like one of the X-men…that I have a special power…and although it’s not particularly useful or explosive it makes me different from other men and that’s important because I don’t want to be like other men.

Another thing I should add is that my gender dysphoria is kind of unusual. I don’t have such an intense loathing of my gender…more like a constant longing to be the other one.

5. So, ultimately…what does it mean to be a man who wants to be a woman?

It means that you are a very unusual man…and you can either spend the rest of your life crying into your beer about it…or you can embrace that difference.

I certainly embrace it…and also embrace an idea Elle Mesen introduced me to in her book, Sissy Hypno: that gender variance almost certainly has some evolutionary function. I believe that the best way to give existential purpose to your male to female psychology is to see it as nature’s way of ensuring that a certain part of the male population will ally themselves with females rather than males. This facilitates the liberation of women – so necessary to the full unleashing of human productivity and creativity.

I see myself, therefore, as some kind of fundamentalist feminist. I have a man’s body and a man’s physical strength, but God did not give me that strength to assert male dominance…

…but to fight it!

If you are interested in learning more about coping with gender dysphoria without transition, buy my book! (ignore the review from my troll!)