Leviticus 20:13 is the perfect law for religious zealots because it strikes a double blow at both homosexuality and gender variance. It prohibits men from sleeping with men, and men from having sex with men…as if they were women.

However, anyone with a knowledge of the animal kingdom knows that there are plenty of species that are partial to male on male action, the one male presenting himself to be mounted like a female and the second happy to do the mounting. Do we also need to put them to death?

A good example is traumatic insemination: a form of sexual reproduction where male insects stab the body of a female to insert sperm into the open wound. Soon after scientists discovered this insemination, they noticed that a certain percentage of male bugs called xylocoris maculipennis had wounds that had been traumatically inseminated. This could only have happened by males screwing other males, thus proving homosexuality in insects. In fact, scientific literature is so full of gayness in everything from sheep to swans that the question is not if animals are gay…but if there is any species that isn’t gay? And it was proof of animal homosexuality that helped convince the U.S supreme court in Lawrence versus Texas that anti sodomy laws should be repealed.

This question has never been satisfactorily answered by religious scholars because they devote their lives to studying texts rather than studying God’s creation: the natural world. In other words, they simply don’t know about the existence of homosexual behaviour in animals, as was shown by Ayatollah Abdollah Javadi-Amoli in April of 2012 when he said that homosexuals are inferior to dogs and pigs, since these animals do not engage in such acts. Indeed, the Quran says of the homosexuals in Sodom…

“Will ye commit abomination such as no creature ever did before you?”

This is extremely puzzling. Why would God speak about homosexuality as if it had never happened before Sodom and Gomorrah when it had been happening in animals for millions of years…and in humans for tens of thousands of years?

I imagine that when fundamentalist Christians hear of such behaviour they try and sweep it under the carpet. Indeed, I have heard religious people say that animals are stupid and don’t know what they are doing and if some of them go around being gay then we should just ignore it. However, even if we agree that they are dumb animals and don’t know what they are doing, it doesn’t change the fact that God is the designer of their brains and therefore chose to include this ‘stupid’ behaviour in their behavioural programming. This leads us once more to the question: why would he include homosexual behaviour in their neural architecture if he hated it so much?

Continuing to sweep it under the carpet, some scholars say that homosexuality in animals is not forbidden by God and therefore is not something he hates. He only loathes it in humans. However, this is downright bizarre – especially when you consider Genesis…

Perhaps Christians could explain it all with the following argument: that as well as making them gay, God also made animals kill each other despite the fact he hates murder; therefore, God – for reasons mortals cannot know – created aversive behaviours in animals and homosexuality is one of them.

However, this analogy is not correct because animals do not commit murder. They kill each other for nutritional motives – just as we kill calves or goats – and such murder is sanctioned by God as necessary for sustenance. In fact, this makes the homosexuality of animals only more anomalous because we can see a clear reason why God would program animals to kill – they need to eat – but there is no such logic in programming animals to be raging queens. 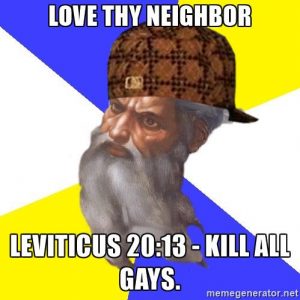 Or maybe the logic is this: just as pigs show us everything that is low and abhorrent, God made animals gay to show how base and wrong it is. The problem with this, however, is that as Ayatollah Abdollah Javadi-Amoli proves, scientists didn’t have any idea animals were gay until the onset of twentieth century biology and many people still don’t know. Therefore, if it was supposed to be an anti-gay message then it was a very badly designed one because no one would get it for 100,000 years of homo sapiens existence. If it was an anti-gay message then God needed to make animals much more overtly gay so that everyone could associate gayness with animals. As God didn’t do this it meant his message was not as effective as it should have been, meaning the message was defective. However, this is blasphemy because an all-powerful and all-knowing God would never craft a defective message.

The simple fact is, my friends, that we could go on all day thinking up ingenious reasons why God created gay animals and then spend all night shooting them down, but the level of ingenuity and creativity needed in both tasks suggests to me that we are barking up the wrong tree. I’m not a devout follower of Occam’s razor (that given two explanations it is the simpler that is more likely to be correct) but in this case it seems relevant. All the explanations that religious people come up with seem over-complex and implausible. So, think of Occam’s razor and ask yourself the following question: what is the most likely explanation for God creating gay animals despite his aversion to gayness..?

Because in fact…he has no problem with homosexuality.

Personally, I’d go for number 2. Given the fact that God made homosexual animals – it seems logical that he has no problem whether I…or you…our your recently acquired pet chihuahua…are gay. The alternative explanation, that – despite the fact he hates homosexuality he created it in millions of species – does not seem logical.

However, it’s time for us to move on from this issue because you’re probably chomping at the bit to get to the more relevant question: “Forget bloody animals…why did God create homosexuality in humans if he hated it so much?” Although this question involves much of the reasoning we have already employed, it is infinitely more difficult because it leads us to the most important justification for the law against homosexuality: that the bible and other religious texts state clearly that homosexuality is wrong. I quote Leviticus 20:13 again…

“If a man practices homosexuality, having sex with another man as with a woman, both men have committed a detestable act. They must both be put to death, for they are guilty of a capital offense.”

This clear formulation of God’s verdict on sodomy makes all arguments from evolutionary biology or moral philosophy or any other academic tool…completely pointless. Fundamentalist Christians believe this is the word of God so all my pretty human words about gays and transgender people are worth shit: The Lord of Lords has spoken and there are no ifs and buts.

As the title of this book suggests, however, it is my opinion that there are some ifs and buts. In fact…a whole lot of ifs and buts…and that these ifs and buts are important not just for the issues of homosexuality and gender variance but for the future of religion in the twenty-first century.

(You have just read chapter 1 of my short book on the question of sin and LGBT living…please follow the link to buy this book and read more.)