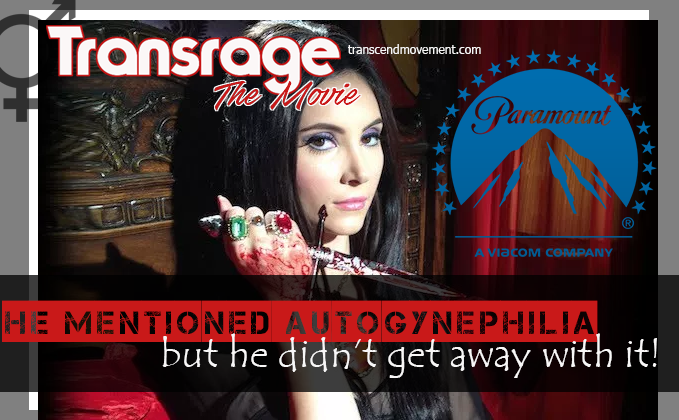 I was amazed to find a thread on the crossdreamer forum yesterday (best forum on the net to discuss crossgender sexuality!) about autogynephilia. For two years I’ve been a member of this forum and discovered they were still having the same argument as the day when I arrived.

Obviously, I understand why this happens, and considering I’ve penned so many articles on the damned topic myself…I’m hardly one to talk. However, I did get a profound sense that I was in different place from my friends, and today I’d like to explain that place and my belief that if autogynephilia gets you into a trans-rage then you’re missing something.

1) It’s not worth spending energy on….

Trans people take the theory of autogynephilia more seriously than it deserves. They don’t understand that the more they talk about it and try to disprove it (as if it was a real scientific theory) the more they raise the profile of Blanchard’s work and give it an importance out of proportion to its merits.

Autogynephilia is not a scientific theory but a proposal for a theory. It’s like when entrepreneurs have lunch and sketch the outline of a business-plan on a napkin. The business idea might be brilliant idea…but at that point it’s just an outline.

Consider this: in order for the taxonomy of depressives (bi-polar, manic, clinical etc) to gain acceptance, there had to be decades of research by thousands of researchers and multiple peer review studies and entire libraries full of books written. Autogynephilia has been researched by a handful of people and all of them were desperate to either prove or disprove the theory and their objectivity is compromised.

The theory is, therefore – until rigorously tested – just a series of ideas based on common observations of trans people and the onus is not on you to disprove it. The onus is on the person who believes it to provide hard evidence.

ADVICE: Don’t get sucked into an argument where the tables turn and you have to argue why you don’t believe in autogynephilia.

You don’t need to argue shit! They need to cite scientific studies and when they cite the measly amount of experiments done, you simply have to repeat that it’s a measly amount and not sufficient to establish a theory in psychology. For fucks sake…we’re still arguing about ADHD and autism and there’s been thousands of studies…why the fuck is a theory about transgender psychology going to become accepted after three experiments?!

The other reason you shouldn’t get sucked into arguing against autogynephilia is that it’s one of those tricky bastards that can’t be disproven.

If it turns me on to be a woman – i.e. I have a crossdreamer sexuality – and then I transition, you can never definitively prove my motive was sexual. However: YOU CAN’T DISPROVE IT! The problem is that what we’re dealing with here is human motive. There is no transcript of my thoughts which can prove my motive…and even if there was we could argue that my subconscious motive was different.

This means that a key part of Blanchard’s theory – the motive for transition – can never be proven or disproven, meaning you are completely wasting your time arguing about it.

There is also a similar duality with the taxonomy of transsexuals. To understand this, think about the following taxonomy of men…

This taxonomy of men can not be disproven, just as you can’t argue against the fact that there are three types of transsexual: homosexual, non-homosexual and bisexual. It is indeed true that the majority of transsexuals are either homosexual, heterosexual or bisexual. But that doesn’t mean shit! You see, taxonomies in psychology are not like types of insects or types of cars…

…They are debatable and you can invent as many as you want.

Autogynephilia is not a scientific theory…but it is a masterpiece of trolling. And that’s why I feel sorry for all those trans bloggers expending so much energy in refuting it: they’ve fallen for the trap, and the more energy they expend and the more angry they get – the more they are being mercilessly trolled…and the more blog space they devote to it the more they do Blanchard’s work for him and spread the virus.

In other words…there are some attempts to spread autogynephilia which need to be rebutted…but many times trans people are just being trolled and should ignore the troll.

4) Autogynephilia is not completely invalid and isn’t going away anytime soon.

This part is going to be hard to swallow but you need to understand it. When I see trans people completely dismiss autogynephilia I feel they lack perspective. Yes, it’s couched in offensive language and stigmatizes older transwomen and it’s an all round shit-sandwich…but for some people it is the most accurate and helpful theory about their sexuality and gender variance.

For someone who can’t or won’t transition it’s comforting for them to think that their desire to transition comes from their sexuality. This makes it less valid. We only need to look at the Emasculation Fetishists to see how some people are desperately afraid of their inner female and if they can put it all down to ‘sex’… they will.

And this is where we get to the heart of the matter. Psychology – especially in the field of gender and sexology – is not a science. All we have are a number of narratives that can neither be proven or disproven. So how do we choose which theory we follow?

ANSWER: Whichever narrative is the most useful and meaningful for the relationship we have with our gender variance.

That’s why you can’t ultimately say that ‘autogynephilia is wrong’…you can only say that it doesn’t work for you. Similarly, no one can say that feminine essence is wrong or right. They are just different narratives that work for some and not for others.

Firstly, let’s stop spending so much time on autogynephilia…it’s not worth it. Better you think: how can we improve LGBT rights in this country?

Secondly, let’s stop thinking of transgender psychology as a science with right and wrong theories. No one knows shit about why people are transgender or why they transition or why it turns me on to be a girl. All we have are ideas that each transperson finds helpful, slightly helpful, not helpful at all, or…toxic.

The crime of the autogynephiliac troll is, therefore, not that they are promoting an idea that is scientifically wrong, but that they are framing something as science that is not science. It’s just a narrative.

Furthermore, this narrative – while useful to a non-transitioner or a fetishist – is utterly useless to a transwoman because it poisons a deeply held view of her gender identity. Telling a transwoman to adopt the autogynephilia narrative is like telling her to change her football team or family or religion. Nobody has the right to argue with her about the narrative she has constructed about her life and her motive to transition.

Your theory about your gender is, therefore, your choice and part of your own quest to find meaning in your life. Don’t let anyone fuck with it!