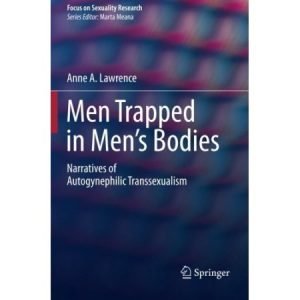 This morning I was chastised by Fiona for subscribing to the views of Anne Lawrence. In my opinion, the subject of Anne Lawrence raises an important point for the philosophy of our community.

Men Trapped in Men’s Bodies should not have been published in its current form. The editor should have insisted the author add appropriate qualifiers to her endless formulation of speculation…as fact. Again and again, Lawrence declares that late-onset transsexualism is an outgrowth of autogynephiliac sexuality when – not only has this not been proven – but it is impossible to prove or disprove.

Furthermore, as someone on the front line of the Blanchard wars, Miss Lawrence has clearly been affected emotionally by the attacks of the transgender community on her colleagues. This led her to intentionally troll said community with the book’s provocative title and constant, repeated insinuations that older transwomen are men with a fetish (said in a more sophisticated way than that…but basically what she’s saying.) It’s obvious this’s coloured her narrative and not only does it damage her credibility but it adds a nasty undercurrent to the book.

However, while it’s right to criticize her tone and terminology, we can not fault her source material! Men trapped in Men’s Bodies is the most important collection of case-studies we have on crossdreaming.

This book meticulously catalogues the sexual inclinations and sexual development of people with our sexuality…and any attempt to discredit that aspect of the book is on weak ground. I understand completely why it’s not pleasant for transwomen to read about what turns us on in such a brazen narrative…and they’re right to be angry…but we can’t deny our behavioural tendencies.

The whole world is full of echo chambers right now, and anyone with a love of knowledge needs to leave those echo chambers. For me, reading Lawrence’s work was like a slap to the face and a welcome antidote to all the trans propaganda. Discovering that some of us can get turned on by putting on sanitary towels (or knitting – when that was considered feminine) or female urination…was radical.

I also found it important to discover that the equivalent of crossdreamers exist within other sexual preferences (pedophiles that want to be kids, guys that want to be plush toys, people that want to have amputations.) That shit blew my mind.

so, Ladies and gentleman, you can do what you want (it’s a free country) but a crossdreamer who seeks self knowledge IGNORE’S ANNE LAWRENCE’S WORK AT THEIR PERIL.

…is her work transphobic?

Yes! And we should give her a metaphorical slap and point out to people that it’s a defective work.

But does it contain vital source material for crossdreamers? Yes…and I believe we should recommend her work – with the appropriate caveats – to other members of the community. We can not start having banned texts on our blogs or forums or we’ll end up in Mao Tse Tung land.

So if you haven’t read it, then read it and assimilate the information…but don’t fall for the unverifiable assertion that transgender desire comes from sexuality…and don’t take on the transphobic terminology.