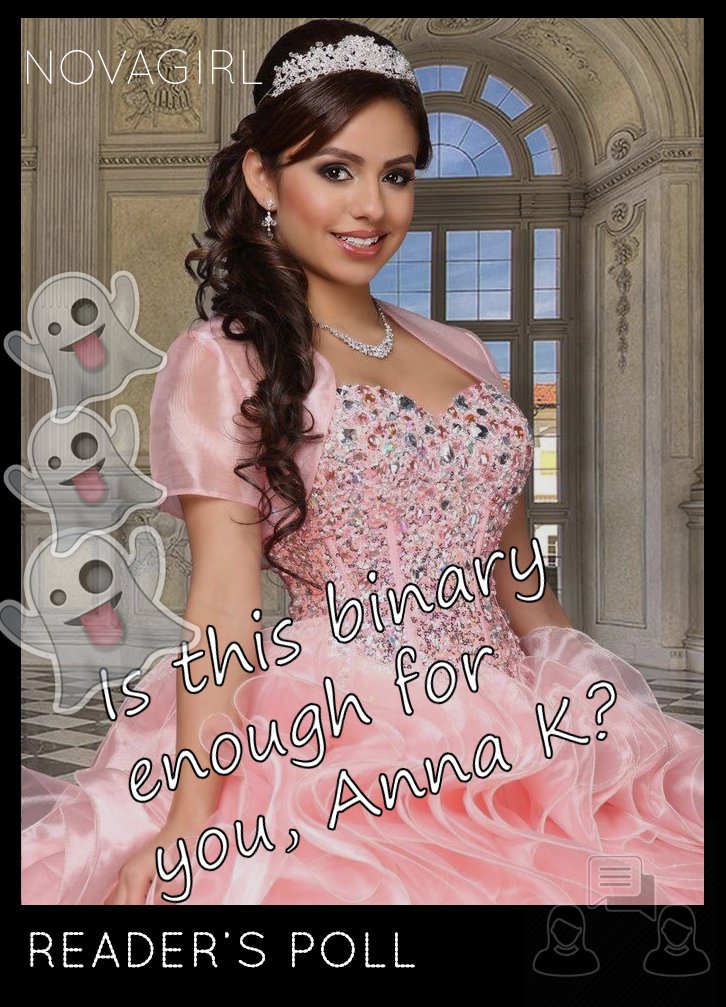 READER'S POLL: How do you feel about non-binary?

Debate of the week: Round 1

FELIX: Okay, Anna…get it off your chest…what’s your problem with non binary?

ANNA K: Non-binary is a concept that seems perfectly logical to us in the transgender community, but makes no sense whatsoever.

It’s a violation of basic philosophy: trying to define a thing by what it’s not. Non-binary is like telling a waiter that you don’t want the chicken salad or the beef stroganoff rather than telling him what you want. Or an imigration agent asking your nationality and  replying ‘I’m non-Chinese.’ Not surprisingly, the agent’s gonna point out that he didn’t ask what you’re not, he asked what you are.

If you feel you’re neither gender or both genders or whatever… then tell me exactly that. Telling me you’re non-binary is a redundancy as you’re only going to have to explain what you are in the end, so don’t tell me what you’re not.

FELIX C: It’s all very well to be against non-binary when you believe so firmly in the binary…

But some people don’t believe in the sanctity of two genders and they have just as much a right to express their gender as those in the binary.

Yes, non-binary is slightly redundant – in that it doesn’t tell the full story of how the person identifies – but the fact that humans need clear, succint forms of categorization mean we need a shorthand for certain gender identities. Non-binary is that shorthand.

For many trans people it’s a good means of telling someone “Hi…my gender is beyond the traditional binary but I don’t have all day to explain it… so let’s just leave it at that: non binary.” It’s a bit like the Facebook relationship status ‘it’s complicated’.

ANNA K: But why’s it so complicated? This is just the typical bullshit of our self obssessed, neurotic generation.  (Adopts a whiney voice) “What’s my gender…ooo…I don’t know: on Monday I feel like a woman but on Tuesday I feel like a man.”

It’s not a trick question or a quantum equation…it’s very straightforward. A trans woman knows her gender, a cis man knows his gender, the whole world knows their gender… so if your gender is a complicated soap opera  then it’s because you’ve made it into one. And – in my opinion – you’ve done it by confusing personality with gender.

Furthermore, if you’ve already divorced gender from biology but still feel both female and male… then what are you feeling exactly? You’ve already dissed biology so it means that the entire sense in which you feel both male and female (or neither) is based on social constructs.

Alternatively, it could mean you’re transgender but you’d have to state the society you are from when stating your gender identity. You’d have to say…”Im a non-binary human from 21st century America”… because if you lived in Asia or Berlin or the Umbuto tribe of the Amazon rain forest, then you might have a different gender because you ‘feel’ in tune with whatever gender construct they have.

This literally means that if your company posts you to another continent you might not only change jobs but also gender!

FELIX: But you’re making the mistake of characterising non-binary in a particular way: like it’s all about changing your gender each day.

As you said…there are many different identities behind non-binary, including transwomen who ease the pressure of passing by saying publically that they’re non-binary. In fact, there are so many different types of non-binary that I can’t even begin to list them, so it’s dumb to try and pigeon hole them.

ANNA K: But that’s the whole point, this immense universe of made up genders and constantly shifting identitites just doesn’t seem serious or sincere. And the reason is because they’re not identities that come from within…forever…the way a binary trans man or woman identifies. The non-binary bases their identity on gender politics or taste or personality.

ANNA: (interupts) Yes but those are constructs that accompany the biological gender I identify with. My identification is primarily based on biology…I wish I’d been born with a vagina.

FELIX: I can’t really see how anyone can escape social constructs of gender, but anyway…why do you care so much about non-binary? Why can’t you just leave people be?

ANNA K: I’ll leave people be…but an unfortunate part of being trans is that you inevitably have to educate people about being trans. And the truth is that I’m getting tired of having straightforward conversations turn into complicated ones the moment folks ask about nonbinary. We’re all lumped into the trans category together, so I feel I have to defend non-binary when people say things like…

…“How can there be all these genders like pangender and demigender etc.?”

So…it’s like…non binary’s this annoying little brother I have to carry around with me, but the reality is that he’s more like a distant cousin. Nonbinary and pangender are the polar opposite from transwomen like myself. Deep down, we believe in the biology of gender and that’s why we spend so much money and effort and tears trying to acquire the biological characteristics of the female gender. Hell, our deepest desire is to have been born cis-female and firmly within the gender binary… so I don’t know why I’m expected to be an apologist for nonbinary.

To conclude…it’s a free country and people can call themselves what they like. So despite the fact I don’t understand non-binary, I’m not advocating for it to be disavowed or expelled from the trans community. I just ask that people stop lumping all trans people together in one big pot.

FELIX C: Well, you say you don’t want non-binary expelled from the community, but if we followed your arguments to their logical conclusion you’re arguing that these aren’t real transgender people. And I think that’s a terribly selfish thing because, luckily for you, you have everything clear: you love the binary and want to be part of it.

let’s imagine you’re the president and you need to clarify our society’s system of gender…are you really going to force everyone into the binary? That would be inhumane…not only because the binary represents to some people just the same horror as if I forced you to be a man…but that the binary has a long, sordid, evil history of oppresion and brutality.

I think that any conversation about gender that allows us to forget the whole thing entirely (or do with it what we want) is a good one. And the idea that we force people who want to esacpe gender back into it…seems utterly inhumane. At the end of the day, I know that non-binary complicates things and that life would be so much easier if we only had two genders… but guess what, kid…life’s complicated!