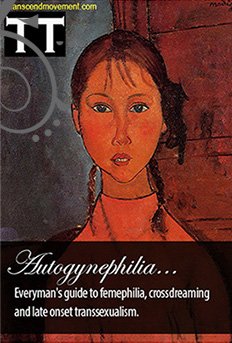 Point A: a human is born a biological male.

Point B: forty years later he wants to chop his balls off and change his name to Tammy.

Question: what the hell happened between point A and point B? Where should we start if we want to understand the phenomena?

Answer: at the beginning.

For many femephiliacs, crossdreamers and late onset transsexuals, the first cross gender experience is what psychiatrists call… a ‘transvestite’ experience. So, let’s begin by asking ourselves what a transvestite is, and how it relates to problems with gender identity.

There are two definitions of transvestite: the savvy one – relevant and necessary to readers of this book – and a dumbed down version for members of the public and the psychiatric profession.

The dumbed down version is this: a transvestite is a person who derives sexual stimulation from wearing the clothes of the opposite gender.

The savvy one is: a transvestite is a person who derives sexual stimulation from wearing the clothes of the opposite gender; however, this is just a part of a deeper sexual fantasy about being a woman, which in turn is part of his Deeper Female Self – which may, or may not develop, as he grows older.

So for our purposes, there isn’t really such a thing as a transvestite – there is only transvestite behaviour. Wearing women’s clothes is just one of various ways in which crossdreamers stimulate themselves sexually in their broader erotic, disposition to being a woman. They might equally be turned on by stroking their chest and imagining they were breasts, or by having sex as a woman. Saying he is a transvestite is like saying a heterosexual having sex in the missionary position is a missionaryist and like trying to define his sexuality by the fact he has sex in the missionary position. We all know that that is just one position and part of his heterosexuality.

Now, because we are not living on a desert island paradise where everyone is naked, he can not identify women by their secondary sexual characteristic of vagina, and similarly – due to concealment and differences in size – breasts are not so striking, either. Also, in a world of gender equality where men and women have the same jobs and both change nappies and do housework, there is less demarcation of behaviour and roles. In fact there are not as many feminine identifiers in the environment as you would think, which means the infant locks on to the most visible and striking sign of womanhood available: their clothing. And of course, clothes that are markedly different will make more of an impression. Therefore – a bright pink, satin dress, screams much more of the female than a pair of jeans. And this would be even more so if the process occurs at an age – so young – the child is not sufficiently observant to notice minor details like makeup and only registers great swathes of moving, shining colour.

If you have a problem with that theory then you could choose a more practical explanation. What the individual seeks in his fantasy is to cross gender. Clearly, however, he cannot just walk up to a chest of draws, take out a vagina and put it on. Clothing, however, is an easy jump to the other gender: open a draw, take out an item of clothing and, hey presto, you have a cross gender experience. Clothing has, therefore, a magic force to the individual who is interested in being the other sex.

Now, talking of the rest of their lives, what will happen is that some femephiliacs will develop and explore their deeper female self. This may range from little more than an alter ego, to the creation of a new identity. When this identity becomes important to them they will question it. They will want to know where it came from, if it is valid, and should they continue developing it. And so they will search in their psyche for its roots and see that if they trace their cross gender behaviour back in time sequentially, it seems to have begun with sex, and that all through their lives the dominant activity in their cross gender behaviour was sexual. And even now, with this new identity which feels so right and beautiful and sublime and seemingly non sexual, they are still constantly fantasising and gaining sexual satisfaction from crossing gender.

Which all leads to the million dollar question…. 1) Is the drive to a cross gender identity which I’m developing now, motivated – deep down – by my sex drive?