Many couples find lingerie, garter-belts and stockings the hottest sexual accessory that exists. In this article we explore the aspects of human psychology which make sexy undies so… well…

This article also explores the causes and characteristics of a deeper obssesion with lingerie that sexologists would describe as fetishistic. This obssesion – often coupled with a fetish for satin – is divided into two types: non-specifc and cross-gender.

If you are specifically interested in how a lingerie fetish fits in with ‘transvestite’ behavior, the final section is for you.

5 reasons why lingerie and stockings are so sexy… 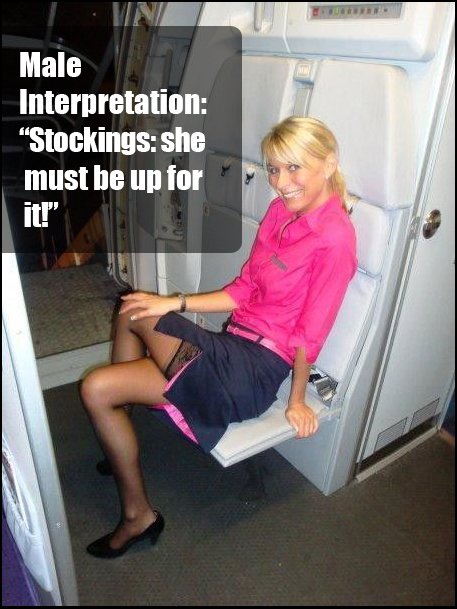 1. Proximity to – and association with – genitalia, breasts and other intimate zones.

The most obvious reason why lingerie is exciting is that it is in contact with the female genitalia and breasts.

2. Lingerie is shiny and silky.

We are all familiar with the way music stimulates our brain and mood. However, sound is not the only sensory experience that gets the adrenaline and dopamine flowing.

Shiny fabrics that hug the body are a visual form of music that excites the brain and heightens sexual arousal. And just as it’s a mystery why certain combinations of notes are appealing, it is a mystery why the reflective sheen of satin has a similar effect on visual receptors.

From an evolutionary perspective, it is probably a biologically programmed appetite similar to to the peacock’s lust for a colorful plume or many other examples of colorful displays associated with mating in the animal world.

Similarly, the feeling of satin against the body is a pleasurable sensory experience. This means that lingerie is not just a visual but a tactile heightener that increases the flow of oxytocin, dopamine, adrenaline and other key chemicals in sexual arousal. 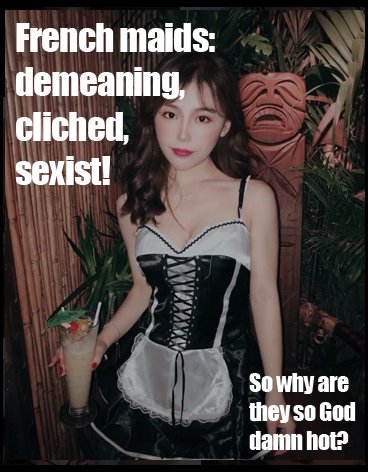 Tight fabrics accentuate the body parts that men are programmed to lust after – such as female breasts and a narrow waist. These are features related to fertility, youth and childbearing.

Human beings are great slobberers, meaning we often find the anticipation of a delightful act (food, sex etc) to be more exciting than the act itself. Tight fabrics are like a taster of the sexual possibilities to come and are a great example of our love of the preview (just as much as the main show.)

But what is femininity, exactly?

Femininity is divided into two categories…

Secondary femininity refers to features of behaviour, manner and appearance that are culturally conditioned. These could range from the elongated neck of women in the Kayan Padaung tribe in Thailand to the ruby red lips of a Hollywood blonde. Every culture has its own feminine traits and these are arbitrary.

There are two important things to note here. Firstly: that in our culture, lingerie – as a form of attire which only women wear –  is an important pillar of secondary femininity. Secondly: that men are as excited  by secondary feminine traits as primary, meaning lingerie has the same power as breasts and genitalia  to get pulses racing.

5. Lingerie and stockings commiunicate a coded message which potential mates interpret (correctly or incorrectly) that the wearer is ‘dirty.’

Some sexologists would argue that men find secondary femininity even more exciting than primary femininity. Why? Because wearing sexy lingerie  is an active decision to mark oneself as feminine.

Men interpret active decisions to be more feminine (a lot of makeup, tight dresses etc.) as an overt willingness to mate. Not only that, but as a message that any mating offered will be of the ‘kinky’ variety. Men see stockings and sexy lingerie as a dual communication…

Unlike other animals, female humans don’t show their readiness for sex by exposing their genitalia. However, like animals, they need to show signs – both of willingness for sex and clues as to the type of sex on offer. In the symbology of sex, lingerie has become a culturally agreed indicator that the wearer is kinkier and ‘dirtier’ than your average woman.

These two signs – of readiness and perceived ‘dirtiness’ – have a powerful effect on men who strongly desire a kinky lover.

“She was wearing stockings so she was asking for it”…

…it’s important to note that while men subconsciously interpret sexy lingerie as a brazen sexual message, the actual message is usually more sophisticated or completely different.

1. The wearing of stockings may be a practical choice in the tights versus stockings debate.

2. If she is communicating readiness and eagerness for sex – it is only with a mate she finds suitable Not you!

3. The choice of lingerie may be informed by fashion or aesthetics and have nothing to do with sex.

How did lingerie – particularly stockings and suspenders (garter belt US) come to transmit this coded message?

What really turbocharged stockings and garter belts as a secondary feminine feature, though, was when tights and other convenient forms of intimate apparel were invented. Comfortable undies meant that a woman’s choice to wear uncomfortable and reductant forms of underwear (such as stockings, waspies, corsets etc.) was now perceived by men as even more telling of a readiness and desire to be feminine i.e. sexy.

In other words, a short dress or mini skirt still has a practical value – especially in a hot climate – but men perceive certain items of sexy lingerie as  having no practical purpose, meaning there could only be one possible motive for wearing them: sex!

Of course, a feminist might object to this narrative, but it is important to note that these ideas are involuntary. They are also balanced out by reason. A man may see a woman wearing stockings at work and get aroused as his animal brain spins a narrative of a ‘dirty little slut’. But, as a civilized adult, he doesn’t actually think that she’s literally a slut.

What is a lingerie fetish and what are its causes?

For example, if you could not get an erection with your wife unless she was wearing sexy lingerie – and your marriage suffers as a result – then you have a lingerie fetish. If you spent all day stealing panties and pinning pictures of lingerie on your wall and generally being so obsessed with lingerie that you couldn’t get on with maintaining a job and friends and spouse…then you’d have a lingerie fetish.

If, however, you have an obsession with lingerie but it doesn’t affect your life, then it’s not a clinical fetish… just a fetish in the everyday sense of the word.

As for the causes of a lingerie fetish, nobody knows why certain non-genital objects – be they feet, lingerie, latex or hair – become a bigger turn on than human beings.
There are three theories – but they all center on the same idea: a mifiring, misprograming or miscommunication in the formation of sexuality.

1. Conditioning: classical conditioning allows any object to trigger sexual interest by association. Thus, if a child feels an infantile sexual impulse in the presence of an ancillary or surrounding object they learn to associate their impulse with the object instead of the original trigger.

3. Neurology: Vilayanur S. Ramachandran noticed that the area of the brain that deals with sensory input from the feet is situated alongside that which processes genital stimulation. He hypothesized that neurons somehow formed an erroneous connection between the two areas. However, as there’s no area for processing lingerie, this explanation is less relevant for our purposes.

Why is lingerie such a key part of transvestite sexual fantasy?

If you’ve never visited this website before, then you probably don’t know that ‘transvestite’ is a misnomer.

If lingerie becomes the deepest and most enduring fantasy of their crossdreamer sexuality, this is almost certainly via a process of conditioning or imprinting. at some point in the young crossdreamer’s development they come to associate femininity more strongly with lingerie than actual females…thus their obsession with femininity has become transmuted into lingerie.