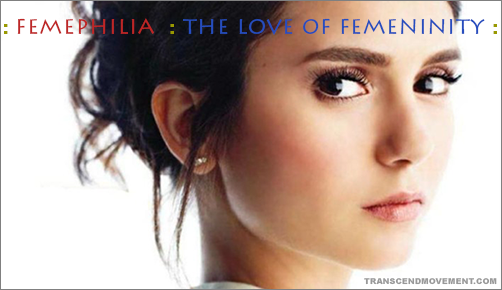 A word on terminology. In my experience, transgender people are the greatest sticklers for terminology I have ever encountered. They can spend millions of internet forum megabytes arguing over the exact meaning of words like ‘transexual’ ‘autogynephilia’ and which pronouns to use. I’ve read my George Orwell, and it’s true that language can be used to fortify both existing power structures and popular prejudices, but I can’t help feel that these people should… get a fucking life! (Though I admit I’ve engaged in such debates so I’ll put myself at the front of the getting a life queue.)

Therefore, please try to get past the terminology and think about the substance of the book. The following terms are used in this book and this is what I mean by them.

I use this term when focusing purely on the sexual drive towards cross gender behaviour. It is a term which allows me to avoid ‘autogynephilia.’ I would have no problem with the latter term, had the sexologist who created it, Ray Blanchard, stuck to its original definition – sexual arousal at the idea of being a woman.

Unfortunately, though, he attached a nonsensical classification of transsexuals to the term which has caused so much controversy and conflict that I deem it necessary to dump it for good. You can read more about my definition of femephilia and why I chose not to add ‘auto’ as a prefix, in chapter 4.

Important note: Femephilia is a purely sexological term and no claim is made for it to either cause, or be caused by, transsexualism. Furthermore, I am not trying to coin a term… just trying to get a workable phrase to refer to sexual arousal at the idea of being a woman that’s not stigmatised.

While male crossdreamers have a femephiliac sexuality, they also have a deeper affinity with the feminine which goes  beyond sex. The Crossdreamer is in touch with his deeper female self.

This refers to any transsexual whom…

Warning 1: This book is for late onset transsexuals and crossdreamers who were born as men and have a history of femephilia. That is the group who I have researched.

Warning 2: this is the part where I tell you that because I’m a philosopher, and neither a doctor, counsellor or psychologist, my advice is no replacement for professional advice. However, the reason I wrote this book is because I think that a certain percentage of healthcare workers in this area are too ready and willing to dash out the hormones. I also believe that spending a lot of time on trans-related websites can make a crossdreamer see the path of transition as easier than it is. To conclude, I think a lot of people in this community need to hear different voices so they can make the right choices. Mine is simply a different voice.

Warning 3: Because I’m a philosopher, and neither a doctor, counsellor or trained psychologist, my advice is no replacement for professional advice.

Warning 4: People are fucking pricks. Because I propose an alternative model to transitioning for mild cases of gender dysphoria, people are going to say I’m anti transition. Obviously I’m anti transition if it’s the wrong treatment, but in many cases it clearly is the right treatment. Also, because, by nature I am politically incorrect, let me clarify that wherever my humour leads me in this book, I believe that transsexuals should be free to live their lives however they want, free from discrimination or judgement. Furthermore, we should help them and facilitate their transition not only with our kindness, but our moral and legal support. Eliminating transphobia is the next frontier we must pass to create a truly equal society.