On the weekend I discovered a YouTube channel dedicated to ‘debunking the transgender narrative’ and exposing late onset transsexuals for what they are: deluded frauds who are all in the throes of a fetish called autogynephilia. To my horror, they then started to read directly from Anne Lawrence’s essays – paying particular attention to lines that referred to transsexualism as a paraphilia i.e. – a fetish.

(I am not going to link to the site because that will bring them publicity).

In article after article they use the autogynephilia theory to ridicule, humiliate and denigrate transgender people, even going so far as to give lists of well-known transgender rapists and molesters. The authors of this site are two ‘reformed’ trans people and it quickly emerges in their videos that they are involved in dozens of feuds with trans-activists and other trans-vloggers.

Seeing this wholesale adoption and use of the autogynephilia theory made me visit Anne Lawrence’s website and reread her essays, where I noted the persistent use of phrases such as…

This is the exact same vocabulary of hate used on this site.

The psychology of Anne Lawrence

Bearing in mind that Anne Lawrence is a transwoman who has had sex reassignment surgery, the mind boggles as to why she would devote her career to proving that she – and people like her – were motivated by a fetish. Why would she pursue a career goal that would obviously come to be used by transphobes to bash people like herself?

While she has tried to soften her message with the idea that ‘autogynephilia is best thought of as a sexual orientation’ and wrote what is, in my opinion, essential reading for any late onset transsexual ‘Becoming what we love’, nothing can change the overall tone of her work. She has remained 100% dedicated to debunking the ‘woman trapped in a man’s body’ narrative (calling her book ‘Men trapped in men’s’ bodies‘) and categorising late onset transsexualism not only as a result of sexuality… but as a sexuality based on a fetish.

The reason she has done this is, I imagine, a belief that as a serious researcher her job is to detail the science… not create convenient narratives that justify transition and SRS. Therefore, while she would love to tell transgender people what they want to hear, her job is to tell the truth.

I respect this dedication to science and to the truth… but there are three things she should have understood.

Three things any researcher into transgender psychology should understand…

1. You can talk about cross gender arousal / crossdreaming but couch it in a language and terminology that is not offensive to the community it pertains to. And you can tell the truth without giving conservatives a weapon to persecute said community.

Unlike biology and other sciences, where there are many hard truths, there are no such certainties in psychology. This means that whereas a naturalist must logically follow the established labelling of different species (this dog is an Alsatian that one is a poodle), the psychologist can choose his own labels.

A good example of this is my own definition of early and late onset transsexuals which is closely related to Lawrence’s/Blanchard’s homosexual/nonhomosexual transsexual. My definition, however, differentiates the two paths to transsexualism without having to dwell excessively on sexuality while still making reference to cross gender arousal.

Anne Lawrence chooses not to do this and consistently uses language that is not necessary. I suppose she thought she was being scientific in doing so… but the science of human sexuality and gender identity is a narrative with little empirical means of verification. Nobody can empirically prove the cause of late onset transsexualism, which means all we have are narratives. She has chosen to base her narrative on a terminology she knows will jarr and offend transsexual people. The worse thing is that this terminology is completely unnecessary as the same narrative can be constructed with related but different terms.

The refusal to do so…. despite the transgender community asking her to… shows, in my opinion, a subconscious desire to hurt that community. I have no reason why she would want to do such a thing but I see no other cause. To vigorously promote the belief that transsexual MtFs are men is, whatever the biological truth, clearly a smack in the face for that community.

2. Anne Lawrence should also have considered that there is no science in many areas of sexology… only educated conjecture.

The basis of Lawrence’s work is that late onset transsexualism is caused by (or is an an outgrowth of) autogynephiliac sexual desire.

This is a very interesting idea and one I would not rule out, but at this point in the development of human knowledge it is a statement that is impossible to verify. To prove it would require knowledge of genetics, developmental psychology, neurology and many other fields that are far beyond our understanding. All it is, therefore, is an educated guess based on the co-existence of two phenomena in late onset transsexuals: cross gender arousal and the desire for SRS.

However, there are many other educated guesses we could make. For example… maybe cross gender arousal is just one part of a complete female identity the late onset transsexual is born with. However, when he presents himself to his family wearing a dress at 4 or 5, he sees this identity is disapproved of and he buries it. The sex drive is so fundamental to being, however, they cannot supress that part… thus it is all that remains of that identity until they can strip away the layers of repression in middle age.

Personally, I don’t believe that, but it is just as plausible and we could build a whole case around it. The point is… Anne Lawrence should know that the theory is ultimately unprovable, so – given it caused so much offence – she could at least tread a little more carefully and tone down the offensive terms. 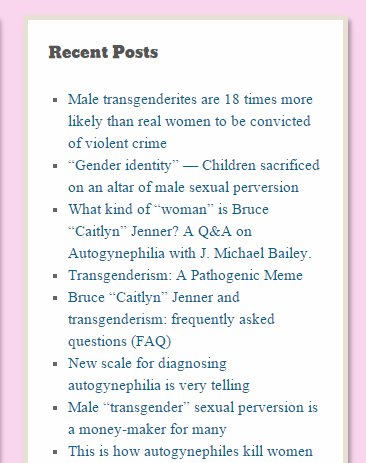 3. The third thing she should have known is that certain categories in science are either not necessary, are offensive or are old fashioned. ‘Fetish/ paraphilia’ is one of those.

I have no doubt that the main argument Lawrence has used to cling to her paraphilia categorisation is that autogynephilia is, technically, a paraphilia.

This maybe so… however, there have existed hundreds of categories and concepts in human history that people took very seriously at the time but were later completely disregarded. One of the great examples of this is the humours. For hundreds of years this was a categorisation system for relating different parts of the body with four humours: black bile, yellow bile, phlegm and blood. During the Greek, Roman, Persian and medieval period these four categories were of the utmost importance. Today in 2015, therefore, I could correctly classify liver disease as a yellow bile disease because that is what the theory of humours states, but you would be like… “Yes, correctly assigned, but the category is fucking nonsense.”

This is exactly the same for paraphilia, defined by Wikipedia as….

Paraphilia (also known as sexual perversion and sexual deviation) is the experience of intense sexual arousal to atypical objects, situations, or individuals.[1] No consensus has been found for any precise border between unusual sexual interests and paraphilic ones. There is debate over which, if any, of the paraphilias should be listed in diagnostic manuals.

The article then goes on to point out that there are 549 paraphilias.

The problems with categorising sexual tastes as paraphilia is that it is not a categorisation that exists for the purposes of science, it exists to make judgements of one type of sexual taste over the other.

Besides that, I don’t think there is anyone who doesn’t have some element of ‘paraphilia in their sexual tastes. If you are categorising something as ‘deviant’ or simply ‘abnormal’ and there are 549 different versions of it, there has to be some point where you say… this is so prevalent I can’t see the logic in trying to say this is so abstract and abnormal and different…it’s obviously extremely common i.e. normal. The only logic in such a categorisation could be to raise one type of sexuality as normal and treat all others as ‘abnormal’ and value judge them as ‘perversions.’ This is exactly what the trans-hating site I saw on the weekend has done… using Lawrence’s article as justification they have categorised transsexuals as perverts.

We can see, therefore, paraphilia is a useless word, it is an outdated category, and no one quite agrees on how to apply it. Our friend, Anne Lawrence, has no such doubts though. Cross gender arousal is a paraphilia and there is not even one suggestion of doubt in this assumption or that such a categorisation might be offensive or dangerous. I repeat… like so many other terms she uses she could easily have used another but she has spent her whole career rubbing transgender noses in the stigma of paraphilia. Now we see the results… transphobes are now telling us that transsexuals are deluded fetishists.

Cross gender arousal exists. Brilliant, congratulations, thanks for informing us. However, its exact relationship to transsexualism is poorly understood and will probably never be definitively understood due to the difficulty of empirically verifying any causal relationship.

Conclusion: why this theory should be permanently eliminated from any dialogue surrounding transgender people.

Now, we are seeing transphobes and haters actually adopt this theory and use it as a weapon to fuel their hate and transphobia. It is clear that this theory should be completely eliminated from the discourse around transgender treatment and analysis. This is not a question of political correctness – it is a question of being humane.

The best way to do this would be if Anne Lawrence herself modified some of the terminology she uses. I repeat, I think her essay ‘Becoming what we love’ is an extremely important work and I think that cross gender arousal should be an important area of research. Unfortunately, though, her work is mired by an unrelenting desire to stigmatise transgender people and to debunk the trans narrative for motives that having nothing to do with science or improving the position of trans people.

A woman trapped in a man’s body may not be a scientific statement but it is a useful tool for both understanding and explaining male to female transgender psychology. To devote your career to debunking this useful tool seems to be vindictive, and even if that was never her intention (I’m sure it wasn’t), the fact it is now being used by vindictive people should make her reassess the language and terminology she employs.