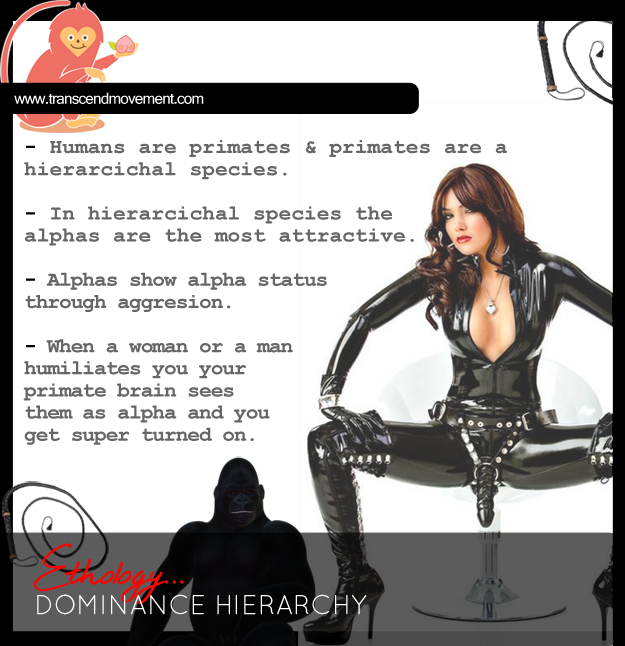 The most important thing to bear in mind if you are troubled by fantasies that involve humiliation (be they forced feminisation or sado masochism) is that such fantasies are extremely common. While there seem to be some personality types that do not enjoy it, I would argue that the vast majority of people do, and that humiliation and control are universal tools of arousal.

Humiliation exists right across the sexual spectrum across all orientations and different ‘fetishes.’ Furthermore, being dominated and forced to perform sex acts on the dominator, or strangers, or an entire bus load of strangers, appears in the fantasies of men and women, gay and straight, the world over.

Why is humiliation arousing?

But why is humiliation arousing in the first place? This is a fascinating question that has not been satisfactorily answered by anybody. All we have are the usual collection of psychological myths…ie… a series of semi-scientific narratives that allow us to make sense of our experience.

If you put a gun to my head and forced me to come up with my own theory, I would shy away from psychoanalytic explanations and move towards biological ones. I suspect that masochism derives from two principles of mating patterns. These patterns are seen in various species of mammals where…

1. A hierarchical species presents a dominant member as more desirable.

2. A universal drive towards seeking a strong, healthy mate.

In other words, I suspect that the humiliation/control angle stimulates a deeply held biological drive towards those who dominate the hierarchy, or – in being utterly controled by a superior / stronger mate – we feel we have found a strong dependable vessel to pass on our genes and are thus sexually drawn towards such strength.

Please forgive me for such outrageous speculation. I return to my original point: the simple fact is we don’t know why humiliation is arousing. We just know that it is.

The logic of forced fantasies – part 2

In part 1 of this article we talked of the logic of forced fantasies and stated that any fantasy which is dificult to attain in reality will always develop a forced version as this makes the dificult to attain fantasy… more viable – and thus more arousing (please read the article for futher explanation).

This is a great way of introducing a similar point and expanding on the central theme of these articles: that crossdreamers worry about what such fantasies mean and how these fantasies reflect on them, but such fantasies actually show nothing about the crossdreamer who has them… they are simply logical consequences of being a crossdreamer and liking (to some degree) humiliation as a tool of arousal.

To understand this point you must understand something about humiliation in a sexual context: humiliation must be personalised to the submissive and WORKS BEST IF YOU HAVE SOMETHING TO BE HUMILIATED ABOUT. Thus…

– A heterosexual man who’s impotent/lousy in the sack, with no gender variance or bisexual leanings being dominated by a woman, will like to be called ‘a pathetic loser who can’t satisfy a woman’ and will probably be into cuckolding.

In each case the dominator will take some characteristic of the submissive which the submissive feels shame about (that he’s bi, or has a small cock, or dresses as a woman) and use it as the rod to beat him and humiliate him with.

The important point is this… if you have forced feminisation fantasies or forced lesbian fantasies or cuckolding fantasies, there is nothing weird specifically about you. It is a logical consequence of liking – to some degree – (as most people do) a bit of humiliation now and again. Liking both humiliation and crossdressing, for example, makes it unavoidable that you will fantasise about being humiliated crossdressing because it is the easiest, most available means of humiliating you.

Here is a summary of the logic.

1. Most people like humiliation and control – to some degree.
2. Humiliation and control require something to be humiliated about and controlled into doing (any desires or characteristics the submissive finds shameful but enjoys.)
3. In your fantasy you will have the dominator choose the most obvious thing about you that makes you ashamed and that you enjoy. Thus, if feminisation turns you on and you are ashamed of it – you will clearly choose this as the scenario.

I therefore see nothing perverted or unusual about men who like fantasising about being forced feminised and being humiliated at the same time. Most people like bondage – including crossdreamers – and it is logical their form of bondage centres on crossgender themes.

Is habitual masochistic fantasy bad for you in some way?

While conducting some research on this topic I read that some psychiatrists have now gone completely the other direction with respect to masochism and believe that the occasional dose of bondage and humiliation might actually be cathartic. In other words, it might have some benefit to mental health. That is a fascinating idea.

However, the key phrase here is ‘now and again.’ While forced fantasies and humiliation should never been seen as wrong or dirty, my personal view is that an element of self regulation is good. This is entirely personal and the advice is given as such, but the thoughts, ideas and fantasies which cross our mind – colour that mind… they affect the smell, taste and appearance of our internal world. As sex is such a recurring subject in our thoughts, I would be wary of allowing most of that thought to involve scenarios of humiliation and domination.

To conclude, therefore, I don’t think transgender people or crosdreamers should worry about any type of forced fantasies… but I think they should be enjoyed in moderation.

Learn about autogynephilia – the love of onseslf as a woman

Looking for a straightforward analysis of ‘sissy sexuality’, we recommend you jump to the following article (click on image).

Looking for a deeper analysis? Buy the first book in this selection. The Science and Art of Transgender Erotica. It answers many fascinating questions about cross gender fantasy.