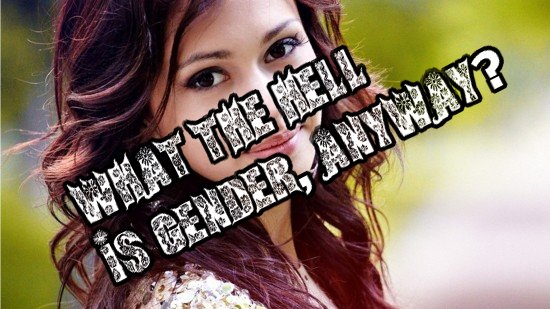 If you are transgender it is likely you have used the word gender thousands of time in your life. But have you ever asked yourself what gender is?

This is where the more practical minded of you want to kick the philosopher and say… “look, stop complicating shit… gender is simple… tits, pussy, menstruation on one side – cock, beard, good at lighting barbeques, on the other.” In other words, a biological definition.

But there’s a problem… if you go for a biological definition then you are basically saying that transpeople are the gender they were assigned at birth. By definition… you are saying that women have a vagina, certain chromosomal composition, ovules etc… and therefore the transwoman is a man parading as a woman. This definition clearly wouldn’t aid the transgender cause.

So, what I thought would be a simple blog post on the definition of gender turned into a 4 week long investigation that took me through the fields of history, politics, biology and psychology. In the end I discovered what I hope you will discover from this article: that understanding what gender is is an important part of resolving your own gender issues.

What is gender anyway?

An integral part of human knowledge is our ability to assign people, things and ideas to different categories. Examples of such categories are nationality, species and sexuality. Another such category is gender.

Gender in Anglo Saxon culture is a category which divides humans into two types – male and female. The assignation to one gender or the other is based on the genitalia. Although there are examples of intersex humans (with both types of genitalia) these are considered anomalous (in the mind of the public) and not numerous enough to challenge the binary category of male and female.

Does gender exist in nature or is it a human invention?

Gender is not a human invention in the sense that two categories of genitalia clearly exist – but what is most definitely human is the importance we attach to those genitalia. For example, for most of human history the genitalia has been used as the basis for an entire system of social organisation and social control. At the beginning of the twentieth century a baby born with a vagina would – as a consequence of this and its resultant categorisation of ‘female’ – not be allowed to vote, pursue a career, fight in the army and would face innumerable other social customs, expectations and controls over her behaviour.

As society has evolved the importance we place on gender as the basis of social organisation has changed. In the west we no longer say who can vote depending on what gender one belongs to and we have laws to protect against gender discrimination.

In CWWADDA countries (countries where women are demeaned and discriminated against (sorry, I have a love of clumsy, over long acronyms) the genitalia is still a key part of social control and organisation. In some countries – Saudi Arabia, for example – there is a defacto ban on women driving (do they think that the penis, extending out of the body as it does – is like some kind of water stick that allows the driver to navigate to the desired destination – something a vagina does not allow?) Whatever the cause, there are still many parts of the world where gender is about politics and power.

Continue our exploration of gender, because it is about to get interesting as we discuss the transgender challenge to concepts of gender.