(If you just arrived from Google, you’ve jumped into page 4 of our transition feature. Start with our amazing SHOULD I TRANSITION? test by clicking on the image below. If not, please continue reading.) 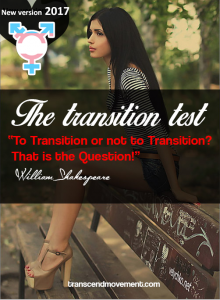 Rather than get involved in a linguistic debate we shall simply talk about your ‘appearance’ once you transition.

Transgender people always have strong feelings on the subject of appearance and the ability of a transwoman to look like a cis-woman, and you will be no different. However, your views are only relevant up to a point. The fact is that we live in a visual world, and people will respond to you based on the way you look. Not everyone, of course – there are lots of people who don’t judge on appearances, but there are also a lot of people who do judge by appearances and a lot of people who try not to, but can’t help it.

Also there’s a difference here: it’s appearance with a complication. Judging by appearance is one thing… but if you are clocked as transgender it’s a double complication… they are judging you by appearance, plus whatever their feelings are towards trans people.

While the public at large are fascinated and titillated by a beautiful transwoman, they tend to be colder towards one who does not pass well. It’s easy for you to say ‘fuck other people’ and you may have a thick enough skin to pull it off, but to adopt and to live that attitude has a certain emotional cost.

Of course there are many ways round this, the most obvious being facial feminization surgery – which really can achieve breathtaking results. However, an often overlooked resource in dealing with passing issues is a good old fashioned positive attitude. If you are a cheerful, vivacious, positive person… people will react positively to you… if you skulk around being paranoid about ‘passing’ then people will probably react negatively. 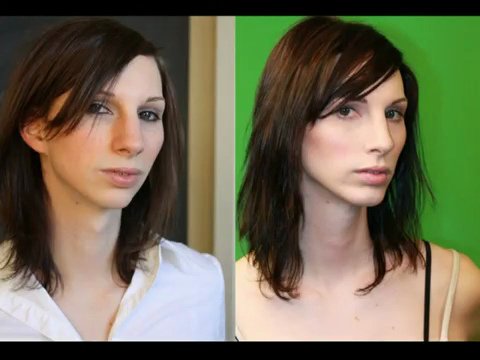 After I went full time, I struggled with the fact that I was passing some, but not all, of the time. The surprising thing was that even when I didn’t pass, people continued being nice to me, inviting me to things, treating me with respect, etc. Eventually I came to see that the world does not have to collapse if I pass less than perfectly.

Finally, of course, there’s your voice. You could go for the Eden the Doll approach and just use your male voice, though… looking like Eden the Doll (a kind of anime Barbie) is a pre-requisite for pulling this off.

The most obvious areas where appearance will factor in are…

– Finding romantic and sexual partners.
– Self esteem.
– Job interviews.
– Interactions with clients.
– How family members react to you (this maybe controversial but it is common sense that if you transition and you ‘look the part’ then it will be easier for them to accept. If you look like a man in a dress… it will be more difficult.)
– How friends react to you (ditto above).
– Casual encounters in the street – shop assistants etc…

1. To what extent are you noticeably trans? (no self reporting. You must ask three people who you trust to be honest (trans people will usually be oversympathetic.)

2. Is appearance important to you? yes / moderately / no 2b. Some transwomen don’t care if they pass or not. Does that describe you?

3. Even the most beautiful transwomen are sometimes clocked. How will you feel when you are clocked and you hear 2 people whispering in the seat behind you in an aeroplane that you’re ‘a guy.’

a) die of embarrassment, ask the flight attendant for a parachute and shout ‘geronimo’ as you jump out the plane.
b) accept it philosophically.
c) turn around and headbutt somebody.

5. When someone criticizes you or laughs at you do you…

a) cry like a baby and run away.
b) I admit I’m over-sensitive
c) It affects me but I can handle it.
d) Water off a ducks back. You don’t even think about it.

6. Are you a positive, outgoing cheerful person?

a) When I win the lottery, yes. The rest of the time life sucks.
b) More or less. I have my good days and my bad days.
c) I know how to work a room.
d) I am a shining beam of joy that brings happiness and light to the world.

7. How would you describe your female voice?

a) Like a Glaswegian miner who smokes a hundred Lucky strikes a day.
b) Not bad… until I get excited and angry and forget myself.
c) Indistinguishable from a cis female.

1. How to cope with not passing.
2. What’s with self-delusion regarding the “passing” issue?
3. “Passing” is a cisnormative term that reinforces gender stereotypes by being inherently sexist and transphobic.
4. Encouraging words for those that think passing is hopeless.