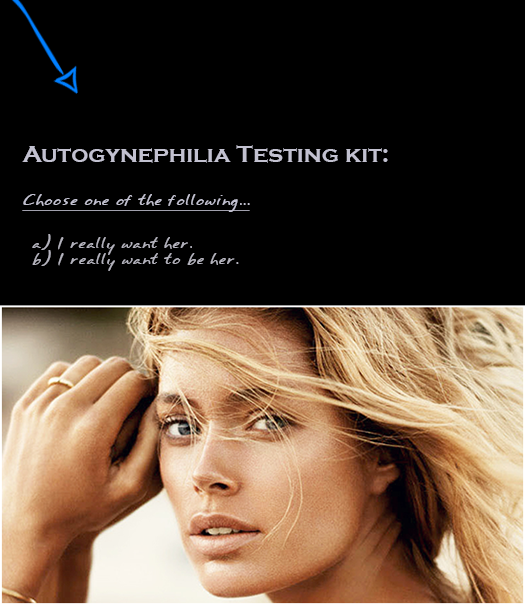 They say in quantum physics that there are some particles which – for reasons unkown – change their behaviour once they are being observed. I would argue that if your taste lies in that direction, knowing about the theory of autogynephilia changes you forever.

It can change your relationship with your sexuality, affect your self image, your identity, and your perception of your own gender. Therefore, if you’re quite happy with where you are now, leave this site. If you want to explore your deeper female self… continue reading.

Almost certainly, autogynephilia is a behavioural disposition that is genetically inherited, meaning nobody chose to be an autogynephiliac, or was made into one by some family member dressing them up like a girl, or any other type of early life event.

In some cases, the three types co-exist.

Another important characteristic of autogynephilia is that it usually co-exists with other sexual tastes and dispositions – often heterosexuality. In other words a person is rarely a pure femephiliac who can only get turned on by thinking of themselves as a woman.

One final aspect of autogynephilia that is notable is that it is not static; it can wax and wane in a person’s life, depending on their life circumstances. For example, it is common for a first time father and husband to experience a lowering of his femephiliac drive. At the other end, however, all autogynephiliacs should be aware that what you consider a purely sexual phenomona has the potential to develop into transsexualism – usually in middle age.

So, is autogynephilia a precursor of transsexualism?

It is believed by many that all late onset transsexuals have a history of cross gender arousal (this is a neutral term for auto-g; for reasons you will soon encounter no one in the transgender community uses the term auto-g). However… only a small proportion of autogynephiliacs go on to transition or seek sex reassignment surgery. NOTE: This does not mean they choose to transition for sexual reasons.

The problem with autogynephilia…

The theory of autogynephilia was an important development in sexology because before its formulation many men were incorrectly labelled as transvestites or transsexuals when they were in fact engaging in autogynephiliac behaviour.

The problem, though, is that the sexologist who coined the term and made this helpful observation, Ray Blanchard, then corrupted it by attempting to correlate autogynephilia with transsexualism. Then he created a bizarre system to classify different types of transsexual based on whether they had homo or heterosexual tendencies. Sounds weird, right? It is. While it is certainly true that some transsexuals have autogynephiliac sexuality the relationship between the two is far from understood.

Not surprisingly, when the transsexual community discovered a theory which seemed to suggest that they were not women trapped in men’s bodies but men seeking a sexual thrill at pretending to be women, they were not flattered.

Therefore, the term autogynephilia now had two heavy loads to carry: its theoretical difficulties (i.e. it just didn’t make sense to anyone except Blanchard himself to add the classification system) and raging controversy in the transgender community.

It is for these reasons that I believe the use of the term is simply untenable. How can we, in our discourse on transsexual and crossdreamer sexuality, use a term which many transsexuals and crossdreamers find deeply offensive? It doesn’t matter if, in some academic or scientific way, you could somehow prove it was the correct term (which you can’t). The goal of language is to communicate and what is being communicated by this word to the LGBT community is not a useful sexological term but an offensive label.

In this program, therefore, I have chosen to refer to the sexual arousal which autogynephilia referred to as… femephilia.

Autogynephilia versus femephilia, and… is there any difference?

I will finish by repeating what I said in the introduction. I am not trying to coin a term or be clever (if I was I would think up something less obvious) I simply don’t want to use Blanchard’s term because it is like a dilapidated, sick donkey laden down with so much baggage it won’t take you anywhere. I need something fresher and femephilia is the easiest one I can get my hands on.

Returning to the narrative

So, the child we saw present himself to his family in a dress, is now, in adolescence, a femephiliac. However, he won’t know that because his sexual desire will be coloured with many shades. He will have mad passionate crushes on girls (and maybe some boys) and it is extremely unlikely he will be thinking he wants to ‘be them’. He will simply have a classic crush. However, in the privacy of his room it is highly likely he will be having sexual fantasies about dressing as a girl, or having sex as a girl, or behaving like a girl… or all three.

What is the next stage in his development?

This dual sexuality will probably exist for the rest of his life. He will be dating and having sex and marrying and externally all will be classic hetero. Depending on his sexual partners he may sometimes play out a femephiliac fantasy. Or not. If, however, his interest in female being, dress and behaviour, starts to extend beyond the sexual then we say he is a ‘crossdreamer.’

Start Session 7… NOW However, if this is the first article you’ve read on this site you should start from the beginning What is a transvestite, and why are women’s clothes so prevalent in cross gender psychology?

Or just buy the book!